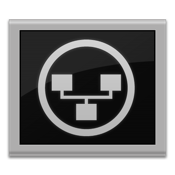 iNet - explore your network!
Find out about security risks and keep your network under control. This easy to use App outlines a computer network even to the unexperienced user. Is somebody using your network without your knowledge? Which devices are currently online? Which access ports are open? Which services are offered? What is the IP of your router? Wake sleeping devices remotely. Add own icons to found devices ...

iNet provides you with information about networks and devices your Mac is connected to. Its very easy and user friendly design even allows the unexperienced user to get a profound and understandable overview of a network, the running services and the Wi-Fi quality.

In the current version the following functions are available:

We did our best to develop a solution that makes network observing as simple as possible. Wether you are a network expert or a common user - iNet provides the information you need to find out what's going on in your network.

• See all devices that are online and connected to a network, along with vendor, IP and MAC addresses
• Assign your own names and icons or choose from the provided icons for easier identifying a device in the scan list. Most Mac devices are displayed with their original icon.
• Set scan range and interface to scan
• Export scan results in csv format
• Connect to devices via different protocols

* • Attention for users of the latest 2013 Airport edition with 802.11ac: Because SNMP support has been disabled by Apple iNet cannot retrieve the usage statistics and wifi strength any more with these models. All other features of iNet are working properly. The following Airport monitoring features can only be used with models prior to the 802.11ac:
• See the current condition of Apple Airport base stations like Airport express or Time Capsule
• Monitor network traffic on Airport devices
• Find detailed information about your Airport base stations like MAC address, IP's, used channels and so on
• See the connection quality of the connected wifi clients in realtime

We will add modules in the future like traceroute and more. iNet is also available for iPhone and for iPad. 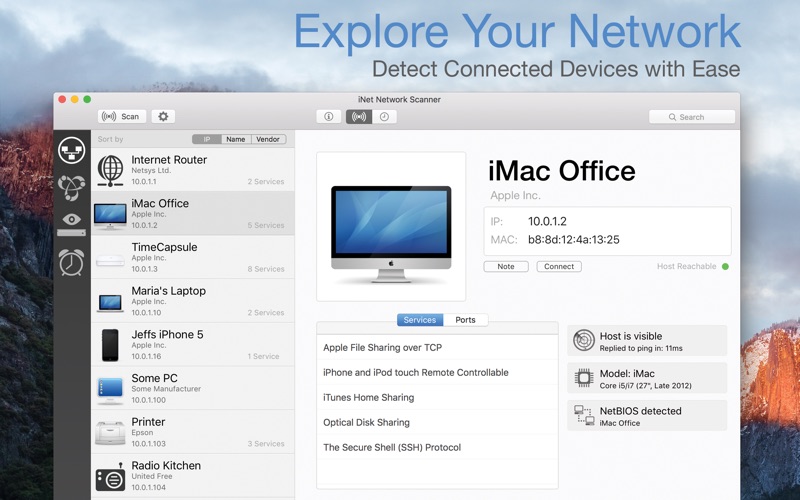 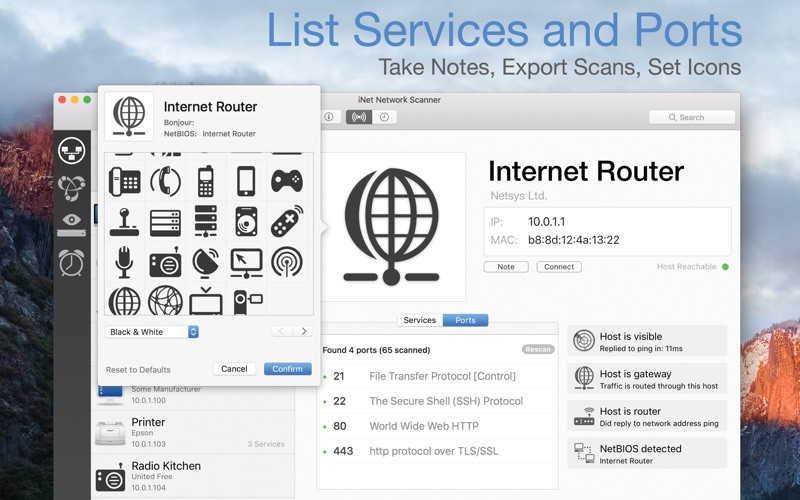 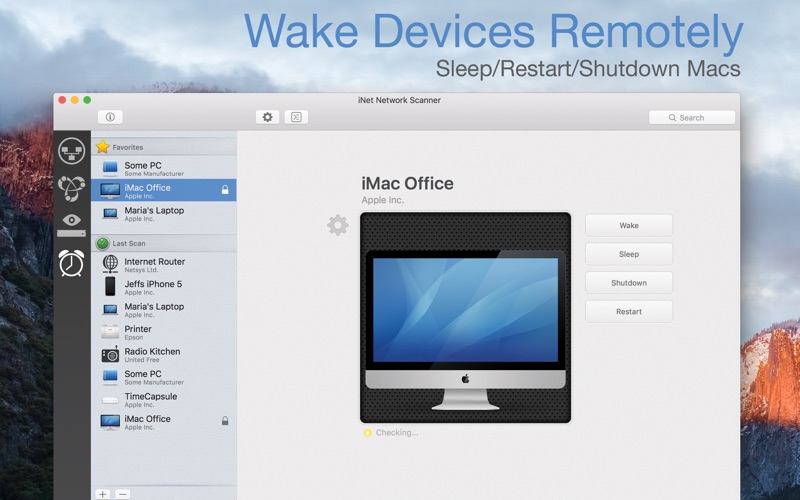 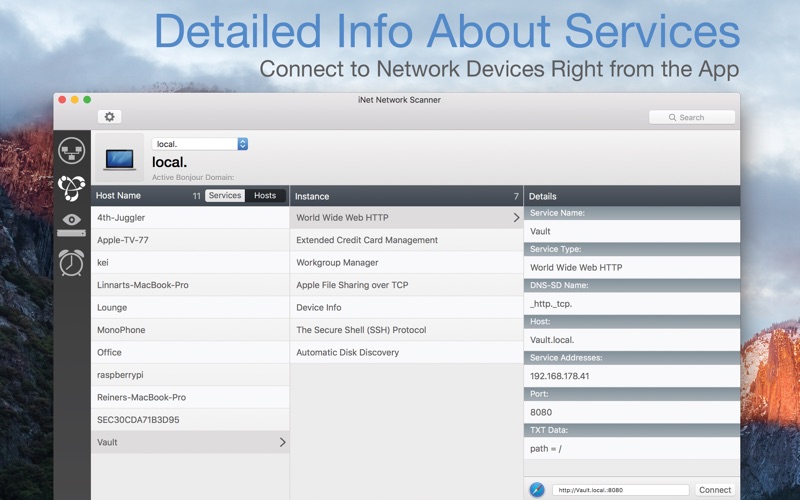 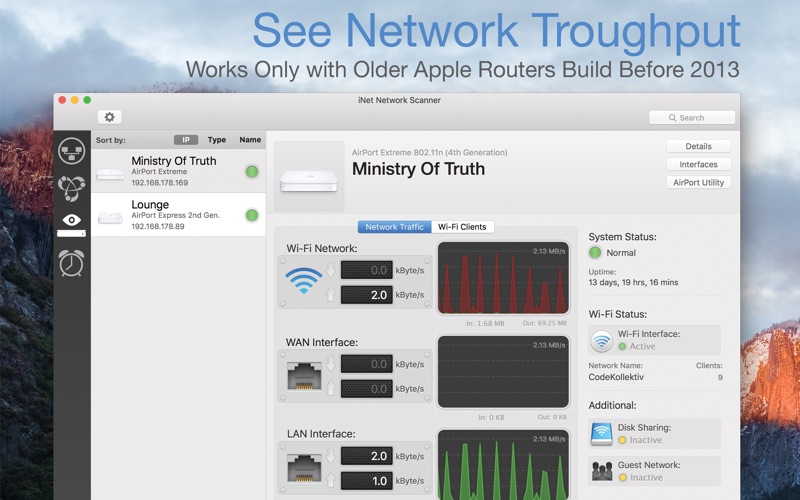 Intuitive and Useful networking app - This app is very well done. Simple and straightforward interface is intuitive and discoverable, some of the top Mac UI traits that sadly have been forgotten in many other apps. Every network admin needs this in their tool belt of utilities, makes it very easy to sniff out network related issues (like multiple devices with the same IP) or simply creating a quick map of all network devices so you can see if something is working or not and/or discover a management interface for some devices that may not have been obvious. Also VERY useful if you are using DHCP and need to access some device but have no idea what it's IP is.

Disappointing Functionality and Organization - BACKGROUND: I have purchased the iPod, iPad, and now the Mac version of this software. I run a network with 6 subnets, 5 wireless access points, and 3 servers running linux. PRO’s: * It’s really handy to be able to scan another subnet from my workstation instead of running over to the access point with my iPod. * It keeps machines information cached so the historical data from previous scans can be reviewed. * The Bonjour scanner is useful for discovering services on the net and is well organized. CON’s: * This app lacks a port scan feature and fails to detect MAC addresses like it should. * All information about a specific device is not accesible through the detail listing for that device. For example: If I perform a scan and click on a device with the IP 172.16.12.154, the software will list the IP address, Host visibility, and online status. To view a list of Bonjour services for that device, the user must change to another screen and sift through another list of hosts to find that information. The device cannot be ping’d or a port scan performed by the user. * The software appears to get its information from the server instead of the devices themselves. I had some machines come up on a scan that haven’t been connected to the net a year before I bought the app. These machines did, however, have entries in the DHCP & DNS servers. * This app lacks the functionality and is organized very differently from it's iOS versions. 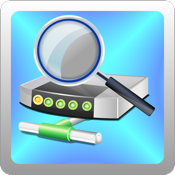 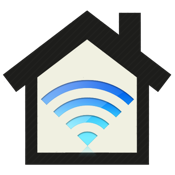 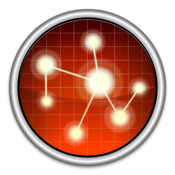 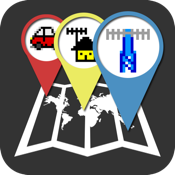 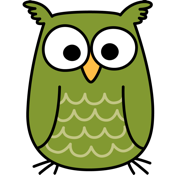 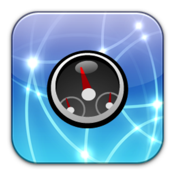