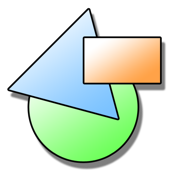 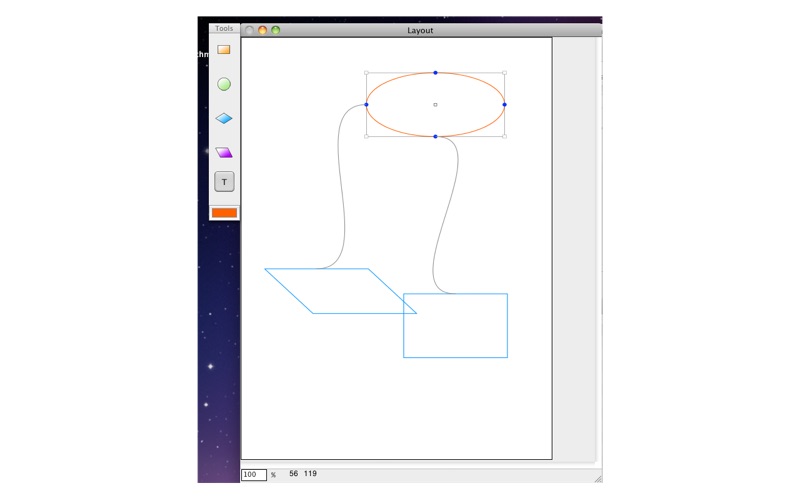 When simple is all you need - Perfect for drawing simple diagrams for free. Bare minimum interface. Printing is its only external means of communication, which is fine since mac has print to pdf built in.

Attempts to fill a need, but fails badly - The lack of dedicated flow chart programs on the Mac App store is surprising, but it opens the way for a simple and low cost app to fill this need. Instead of getting something like OmniGraffle or other multi-purpose graphics program, a $5 app that could be used to create flow charts with text quickly and easily would be well worth the cost. Instead, iDiagram does little more than create a canvas and shape tools with a proprietary file format, a text feature that is not obvious (but should be), no on-line help, and a link to a totally unhelpful web site for support. The links on that site to other programs from the same developer suggest that iDiagram will not receive the effort it needs to become a polished, or even a completed, app. This hardly counts as an Alpha release, a skeleton of what could, with work, become a useful, functioning app that fills the need for a quick, simple and low cost app dedicated to preparing flow charts. At present, it might let someone produce a simple diagram that could be copied in a screen capture or printed to a PDF, but I doubt that it is worth the time. Also, the "information" box on the App store is currently saying that iDiagram has a rating of "4+", but the average of the 23 ratings available at this time is 2.26 on a scale of 1 to 5 (I really wish the scale was 0 to 5 - that gift of 1 star for the lowest rating is misleading). If programs of this limited quality proliferate on the Mac App store, it can only harm the reputation of the store. Just because it is free doesn't mean it is a value.

Can't open it's own files. - This is an OK app. The thing that would make this a GREAT App is simply being able to resize the window so i can make it wider/bigger. I use huge flow charts and would be able to complete them ALL with this app, excpet for the fact i can't make it bigger to accomodate more Nodes. Not being able to Copy and Past Nodes is not really a deal breaker, but the funtions seem to be there under the Edit menu but not useable. Besides the fact that when i click on a saved file form the app, i get a message "Sorry iDiagram Cannot Open idiagram Files" ... Really? Lastly the T Button, which i presumed was to enter text, did nothing. You have to right click in the Node to "Change Text", which is defaulted to white btw. This is defentaly a Beta Version in my mind. Everything else i can forgive, but white Font color on a white background is something that shouldn't really be overlooked before submiting, especially if youre hoping someone buys other products from you int he future or even a Pro version.

Simple and useful, with potential to grow - There isn't much to it, but it works fine. It's free, so I can't complain. OpenOffice Draw offers a more robust set of features, also for free, albeit with a much more cluttered interface. I think that if iDiagrams can be fleshed out with some more advanced features but retain a simple interface, it can really become a very desireable diagramming app.

Found helpful by 8 out of 9 people
4/5
Version 1.0
Review by mellzyroo

Simple, Quick, but needs a Help section - Simple (FREE!) app, great for very quick mock-ups. Definitely needs a help page to explain the nuances of getting it to work (drag from blue dot to an only-visible-when-over-it orange dot to make a connection). Also needs a canvas that extends to infinity.

Useful, but severely flawed: - This app has great potential as a simple, useful tool. However, it has various flaws that make it a struggle to use. First of all, it saves its files in a format that it cannot actually open, so you get only one shot to make your diagram perfect. It has no copy/paste or duplicate feature, so you must resize every object separately. Every object you add to the screen appears slightly further down and to the right than the last, so once you add a certain number of objects they will start appearing off the screen, so you cannot select them or move them. The app has the potential to be convenient and useful, but the issues I have named are glaring problems that make the app a pain to use. I implore the developers to fix them.

Found helpful by 7 out of 7 people
4/5
Version 1.0
Review by Software Development Engineer

35 total text boxes, in "letter" page setup - This is an okay app for making very simple flow diagrams that look reasonable, for free. Tips: - To make multi-line text, press Ctrl-Enter for a newline. YAY! (found this through guesswork) - To get more rectangles, start with a larger paper size (in page setup), then squish things down. - To export, print (command-p) to PDF. This has the advantage that drawings become read-only. - To change an oval to a rectangle (for example), delete the oval and create a rectangle. - To change the outline colour of a shape, change the "colors" option while it's selected. Complaints: - Connecting lines are not configurable enough; they curve oddly and run into each other. - Connecting lines' colours and thicknesses cannot be changed. - Shapes cannot be filled with a colour or pattern. - There is literally no documentation. - Text colour cannot be changed. - Text within a given box can only have one font (typeface, size). - Zooming out (e.g., to 75%) distorts the view until the program is re-opened. Overall, an okay app, but it needs some work to be fully functional.