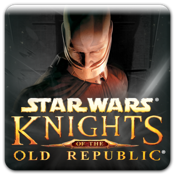 4000 years before the Galactic Empire, you must lead a party of heroes and villains in an epic struggle to save the galaxy.

Will you master the powers of the light side of the Force? Or will you fall victim to the temptations of the dark side? Every decision you make will change the future for you and all of your party members.

Design your character and play your way. Whether you prefer stealth and hacking mechanics, brute force lightsaber combat, or using Force powers, there’s always more than one way to tackle a situation.

Your epic journey will take you to iconic locations including: the Jedi Enclave on Dantooine, the Cantina on Tatooine, the Sith Academy on Korriban, the Wookiee home planet of Kashyyyk, and many more diverse planets from the Star Wars canon.

If your system does not meet these minimums, Star Wars™: KOTOR will NOT run on your Mac. 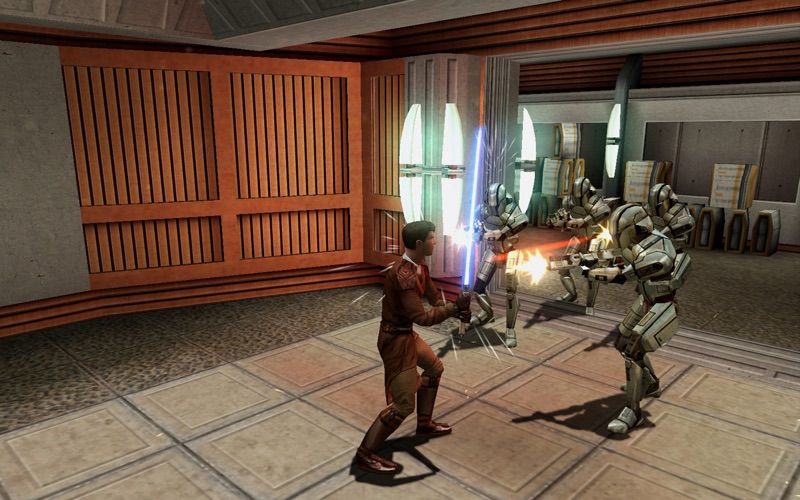 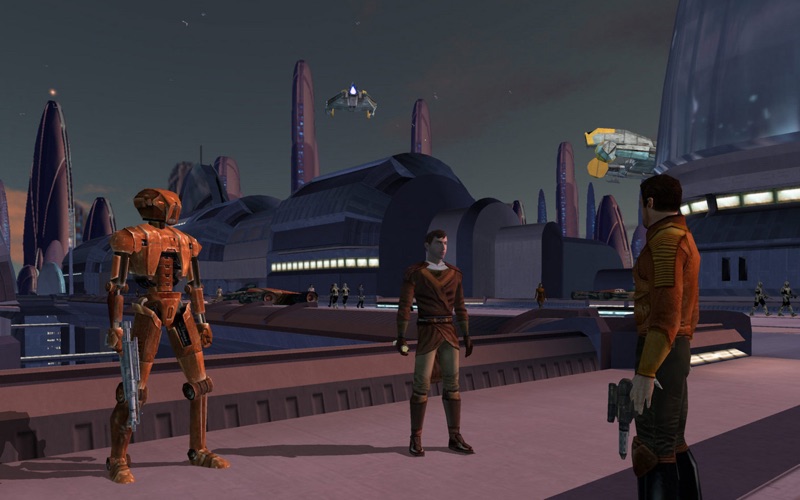 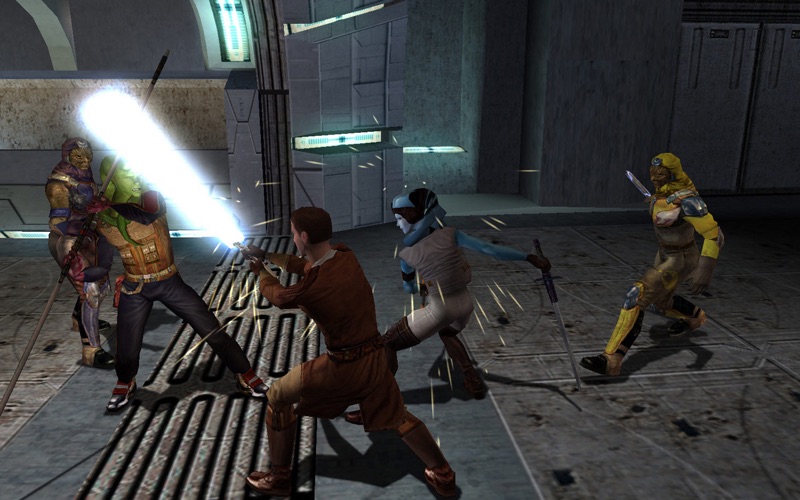 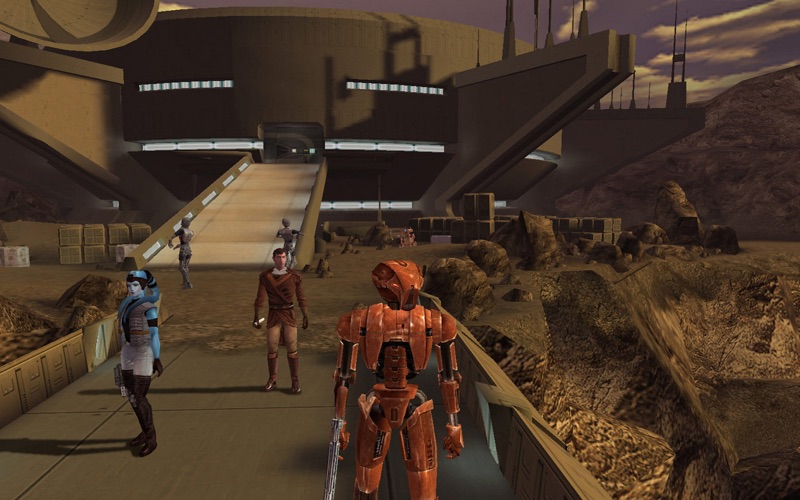 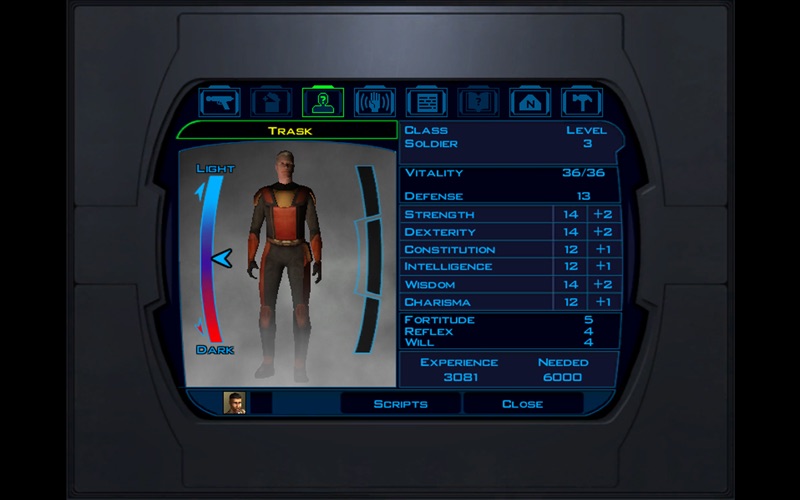 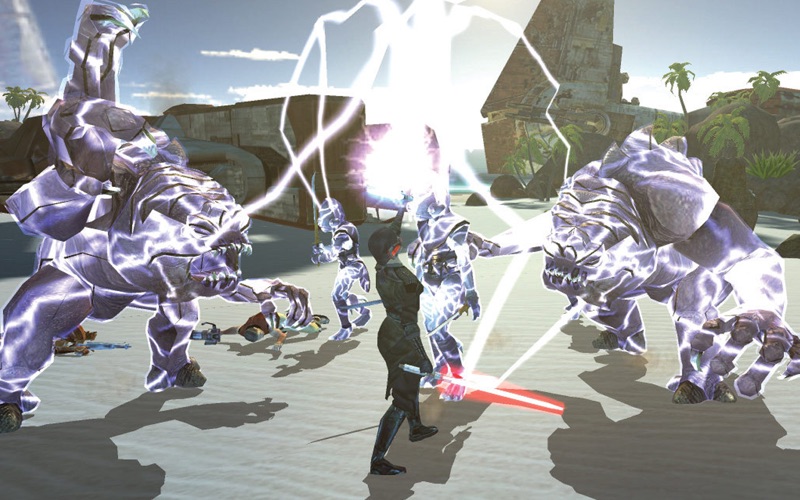 KOTOR II now please! (And reboot KOTOR III while you’re at it) - Game is outstanding. It starts out slow when you don’t have access to a lightsaber but once you do it’s great. Took me 26 hours to beat, though I tried to be thorough with the quests so I’m sure you could do it faster. Also, be prepared for a decent amount of slow travel… Tatooine’s Dune Sea is a vast area of virtually nothing but sand, which is a little boring. I know this is useless now but it would have been cool to still be able to play around after you beat it - instead, once you kill Malak, they take you through some cut scenes and then return you to the main menu. You can’t continue questing or leveling up after that. Also, truly would have enjoyed further character customization. Regardless, worth every penny, definitely a good way to procrastinate around finals for me :) No noticeable bugs playing on a late 2011 MBP i7 16GB RAM. Now if only we could get KOTOR II back… it’s been a very long time since I played that. And for the love of God, please reboot KOTOR 3, I know it was cancelled in its production, but with SW Episodes 7, 8, and 9 on the way, there’s going to be a MASSIVE market. Battlefront is already taking advantage of this, but I’d rather play an RPG as a customizable character with a versatile storyline manipulated by decisions you make along the way, not some guided storyline that the Battlefront games usually bring to the table. Overall awesome game though, just wish there were more like it!

ITS A TRAP! - I have a brand new computer with OS X Yosemite, I was so excited to be able to play this game again and must say that people don’t give it enough credit in the modern day, it is ten years old, what kind of graphics do you expect?!? The problem is that the game doesn’t run at all, it “quits unexpectedly” before even booting and when I press reopen I get the same message like there has been no effort to retry the program. After paying 10 dollars for this game and getting so excited to be reunited with an old friend, I wonder why it is that Apple, Lucasarts, or whomever is responsible for this version has neglected to do any quality control in this matter. There’s a thin line between neglegence and theft here. And it’s alarming when the aforementioned companies seem to be really good at quality control, not to mention Bioware who has made a whole slew of great games including this one (well, not this version). The game itself is awesome and is a must-play for Star Wars and RPG fans alike. I am ashamed to give it only one star, but there is no lesser choice without rating it. Should be a five star game hands down and if APP STORE had any guts, they’d put my review first so people wouldn’t be tricked as I have. Oh, and may the force be with you!

Found helpful by 8 out of 9 people

Why did I even bother - Yeah, why did I even bother to buy the game. I loved KOTOR but this will not work fo the Mac. I read the reviews of how buggy and glitchy the game is, should've listened. Yes, the game is barely playable. The game itself is good, just not on a Desktop or laptop flatform. The controls are really clunky, and my character gets stuck where I am unable to move. If you want to play KOTOR, I recomand downloading from STEAM or a Console. I had a slight hope that the reviews would be all BS, unfortunatly I was wrong. Save you're money, don't buy it on the AppStore if your going to play on the Mac's.

Buggy port - Totally unplayable. - Do not buy this - not mention lack of widescreen support, even worse, you can't finish the first level on the Endar Spire due to your main character not being able to move after combat sequences. You can get through part of it by switching to the other party member, moving him, then switching back to your main. However, toward the end of the first stage, your party member disappears which means at that point, the only thing that can get your main char moving again is to click on something in the environment that will cause them to move toward that... and that's *ALL* the movement you are capable of. Which means, you can not pass the first level. I paid $10 for about 5 minutes of buggy game play before. For this to be an Editor's Choice is sad. It's a total rip off and belongs no where near the top games on the App Store in this current version.

This is one of my favorite games of all time. - I love this game, and have played it through half a dozen times, but since the latest update it's lagging on my 2012 MacBook Pro. Even if I turn off all the visual enhancements, it's still choppy. Not sure what they did, but it wasn't an improvement.

Awful - buggy and boring, wish i could get a refund lol 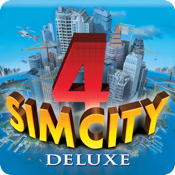 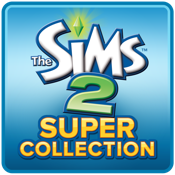 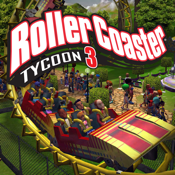 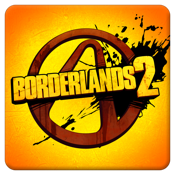