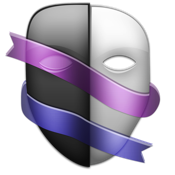 Persona is a character development app that will help you to know each of the characters of your story. Instead of allowing them to evolve as you write, with Persona you can purposefully develop the characters of your story using psychological principles that influence the different motivations of a personality. Persona presents you with 32 archetypes along with a description of their personality traits, virtues, and flaws, and how they interact with other personalities. Used by countless professional and novice writers alike as a critical component to improve the story creation process.

With Persona you can:

•Explore the relationships and interactions between
each of your characters.
•Categorize each character into one of 32 archetypes
and 64 styles.
•Create Smart Groups of characters based on attributes
like tags, type, sex, or any word or phrase from your
notes.
•Construct ad hoc groups of characters without a
defined relationship to explore their interactions.
•See what happens if the man or woman of the hour
suddenly becomes corrupt and turns into a villian or
villianess.
•Shape the details of a character from the color of their
eyes to their hobbies or occupation.

Whether your character is a brainiac talking fish or an outcast orphanage owner, Persona helps you explore how each one’s unique psychology and background influences their dealings and dialogue. 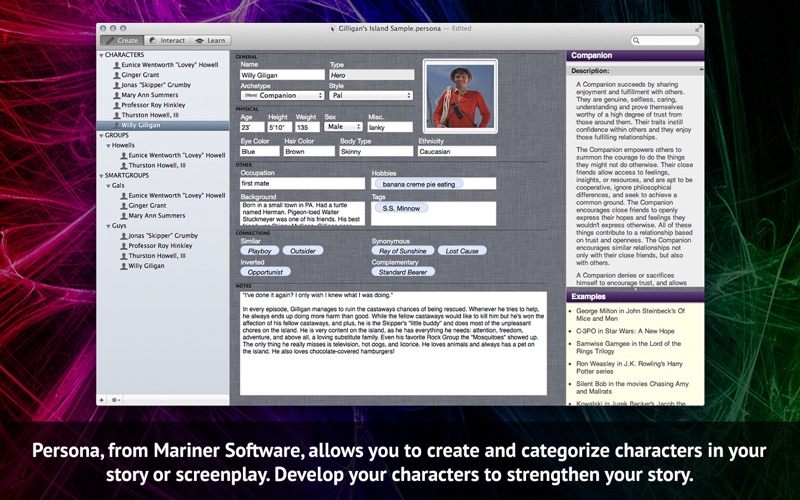 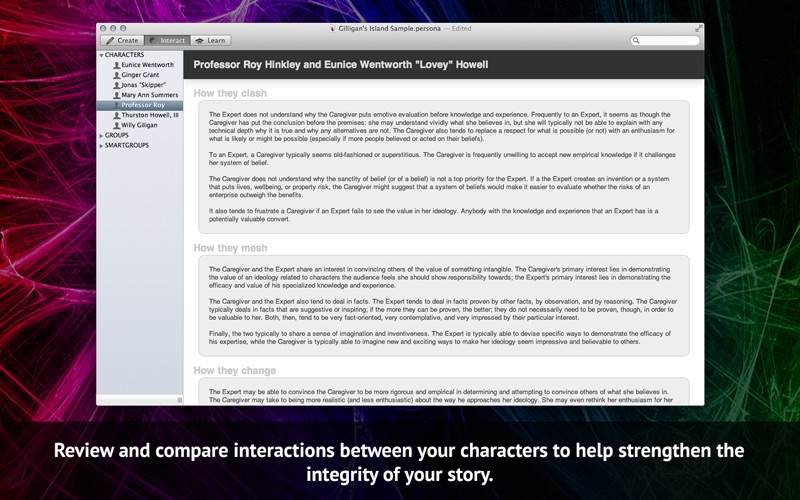 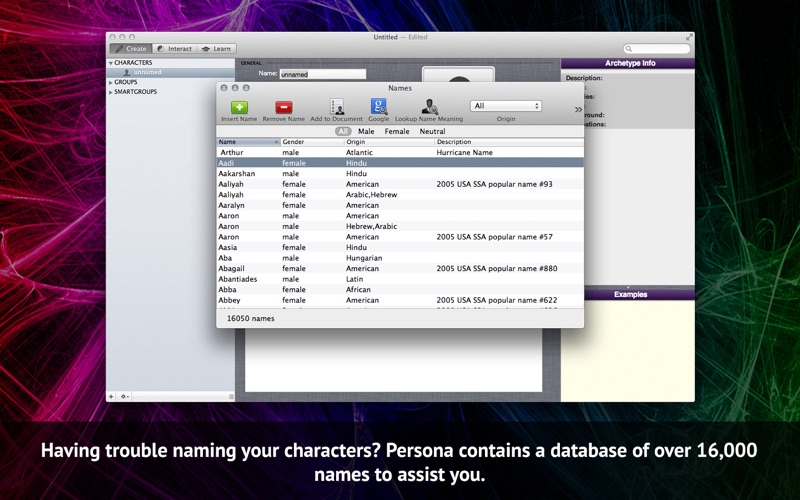 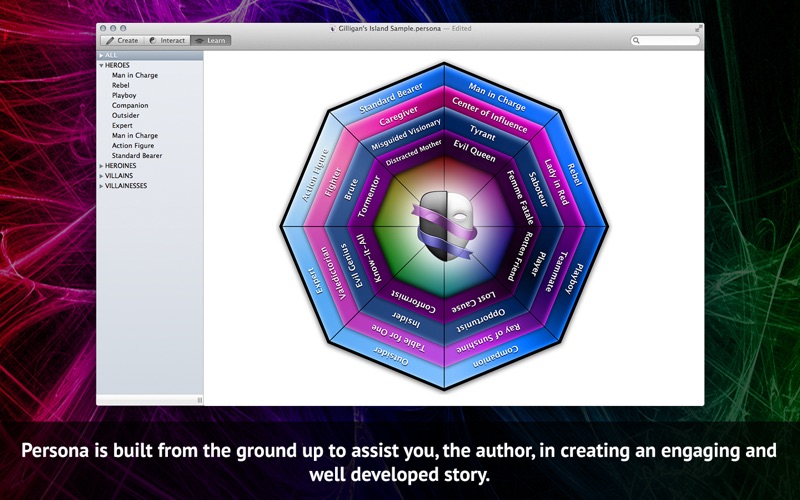 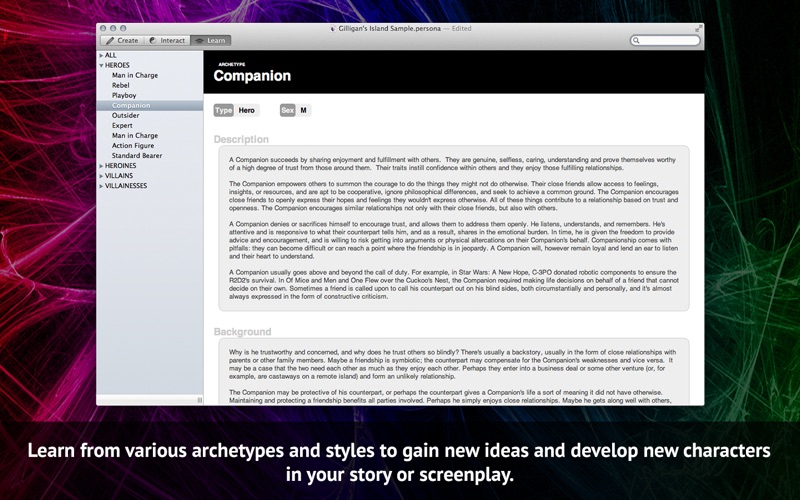 Helps generate ideas without putting my characters in a box - I really like this software. It's simple to use and it has a great deal of archetypes to use. Of course this shouldn't be the only thing you use to create a character, but what I've found to be helpful is that it generates ideas. When I started my character profiles I got so many ideas of what I wanted to do with them. It can be easy to think that you'll be held in a box by this software. I don't feel that way. The creation of the profiles are limited. You choose an archetype and enter in some general information. It's not more extensive than that. The most useful element of the software is the archetype database. When you create more than one character it will show you how these characters either get along or clash. This is what I believe to be the most valuable aspect of the software. The only thing I wish is for the software to expand so that I can enter in more information about my character, such as entering my own internal and external goals/motivations, where they're from, family life, etc. Hopefully they'll add that because it would be easier to have all my character information in one place. This will allow authors to use their database of information while giving the author more control of their characters. Here's hoping. Otherwise it's pretty good.

Overtly Sexist! - After reading the reviews, not just on the App Store, but elsewhere on the web, I decided to give Persona a try. I understood that the program was limited in its perspective, catigorizing characters as either hero or villain, with little room inbetween, but I still thought that I could make use of it. I was wrong! Persona is overtly sexist in its categories! And even offencively so. For example a man can be catagorized as a “Man in Charge”, where a woman is a “Center of Influence”, a man is a “Rebel”, a woman is a “Lady in Red”, and it goes on like that. Even the villian catagories are bad “Tyrant” vs “Evil Queen”, and “Sabature” vs “Femme Fatale”. And then there’s the character’s “Style”, as defined by the “Archetype”, litterally you get two options each, I checked. A male “Rebel” can be defines as either a “Froce of Nature” or a “Nonconformist”, where the female equivelent “Lady in Red” is seen as either an “Ameture” or “Professional” (in that order), and it only got worse from there. Over all this program is extremely limited and inflexible, offering only 8 points of physical description for your character (by the way if you choose an archatype for your character, Persona will auto fill gender for you), and 4 points of “Other”, to better define him/her, followed by “Notes”. There are no options to add other points of your own. In the end, I cannot see my self recomending Persona to anyone, at least not until its programers give it a major 21st Century update, and considerably more functionality as well.

Found helpful by 8 out of 15 people 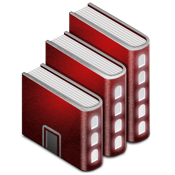 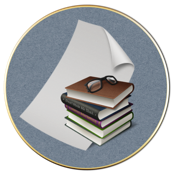 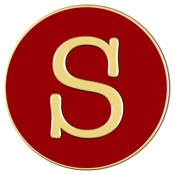 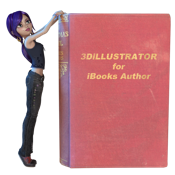 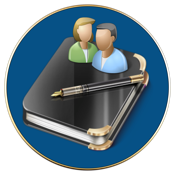 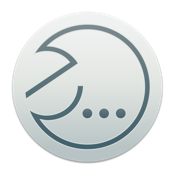