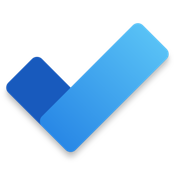 Stay organized and manage your day-to-day with Microsoft To Do. Make shopping lists or task lists, take notes, record collections, set reminders and more to improve your productivity and focus on what matters.

Microsoft To Do is the task management app that makes it easy to stay organized and manage your life. Accomplish what’s important to you each day with My Day and Suggestions, personalized day planner tools.

Daily tasks are simple with To Do, from grocery lists to housecleaning routines. Intelligent suggestions recommend tasks from across your lists that may be relevant each day.

Microsoft To Do helps you quickly capture and retrieve your lists and tasks across devices. Sync reminders and tasks with Microsoft 365 to access them anywhere.

Capture tasks from different Microsoft apps and services and sync them with Microsoft To Do, from flagging emails as tasks in Outlook to lists from Cortana. Your tasks and lists are hosted securely on the Microsoft 365 service.

Make your lists unique with customizable features like emoji, colorful themes, dark mode and more. Stay connected and collaborate with friends and family by sharing lists to coordinate.

Microsoft To Do Features:

Daily Planner
• Stay focused with My Day, a personalized daily planner with suggested tasks
• Get your lists anywhere, on any device
• Add notes to any task

Task Manager
• Share lists and tasks with your friends, family, colleagues, and classmates
• Create color-coded lists
• Set one-time or recurring due dates and reminders
• Break your tasks into manageable steps
• Attach files up to 25 MB to any task

Whether it's for work, school, or home, To Do helps you organize and simplify your plans. To Do is free and available on all your devices.

We have fixed the issue where grouping by due date in the Planned list was missing. With this update, you will be able to see the tasks in Planned list, grouped by their due dates. 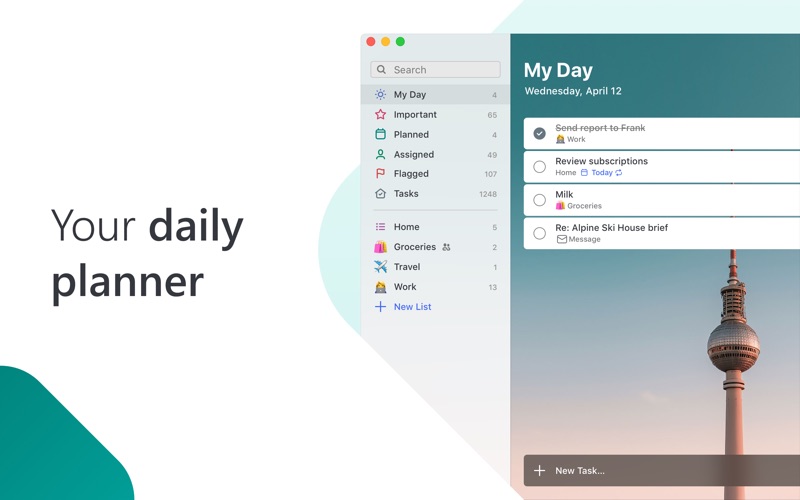 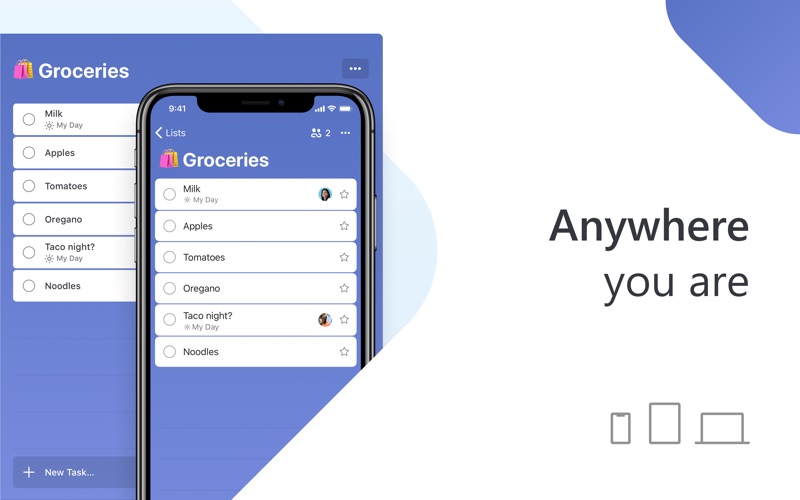 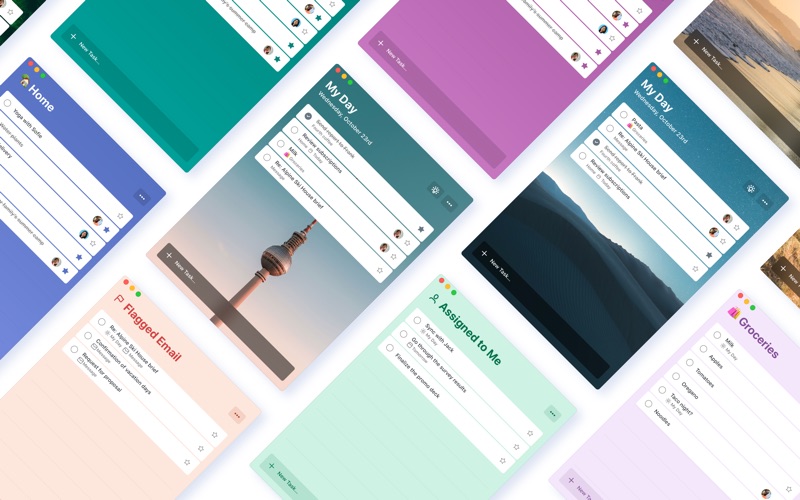 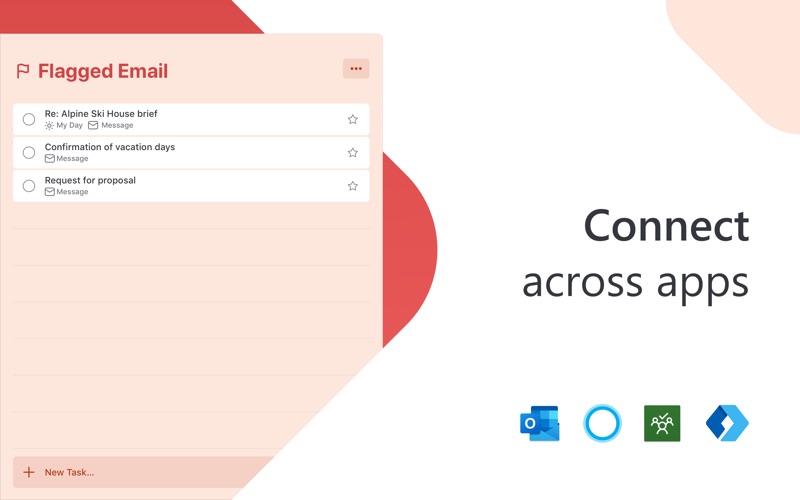 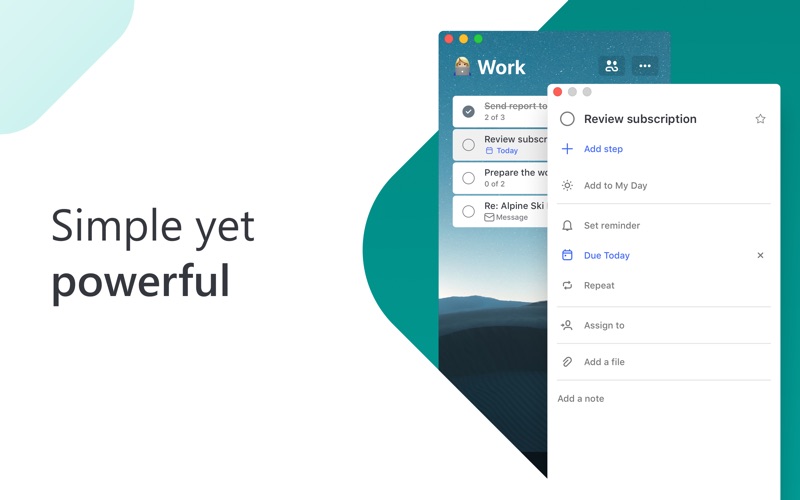 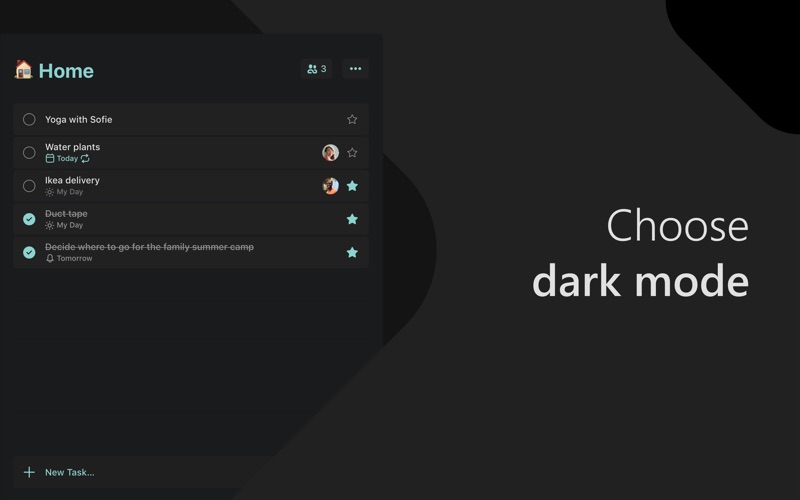 It may replace Things 3 for me - I used to use Wunderlist and liked it but then I got into OmniFocus and Things 3 for larger project management. I prefer Things 3 over OmniFocus by a long shot but Microsoft's ToDo really offers a nice option. I like the interface and low-friction ability ot enter tasks, due dates, and reminders over Things 3 which requires a few more key clicks. I love the MyDay option and now that it finally shows up in the share sheet I can start to use it to save links etc. like I have been doing in Things3. Highly recommended! Also, you can't beat the price...thanks Microsoft...

A shabby substitute for Wunderlist - I've been using Wumderlist for years and have absolutely loved that product. So, while I'm happy for the team that they were aquired by Microsoft, I am really frustrated with the feature set of MS To Do as compared to Wunderlist. For example, Wunderlist let you type in a task with a bulit in reminder. (e.g. Set up a call with client x at 11:00am) and it would show the task as "Set up call with Client X" with a reminder attatched to that task which would trigger at your specified time. With MS To Do you it will ignore any time parameters you input as text. You have to go into a separate screen and set up a reminder manually. That's stupidly inefficient for an efficiency-focussed app. MS task also doesn't seem to remove completed items like wonderlist did, so your lists become cluttered and hard to parse. And, the reminders, when they are set, often get stuck in a recursive loop and cannot be dismissed without force quitting the app. Initially I thought MS bought Wunderlist to invest in it and make it better. But it's clear, they just wanted to kill a great little competetor to release their own garbage version. I am so disappointed. Clearly I need to find something else. RIP Wunderlist. You were truly a great little product and I miss you terribly.

Link To Do with Oulook - I prioritize most of my tasks in Microsoft Outlook. I wish there was a way for me to link my to-dos and unread emails in Outlook and have them appear in To Do.

Awesome tool. - This tool is simple to use.

Wunderlist Replacement - This is - I guess - an OK product. Like many I was forced to it from Wunderlist, which was a wonderful product. There are lots of little things that don't work quite right, removal of confirmations that increase mistakes, and so on. I mean this is a To Do list - how hard could it be? Not difficult to make on OK product asnd Microsoft has done that here - but if you seek a wonderful to do list this isn't it.

top bar icon - I wish To Do could run in the background, toggled by a little icon on the top bar like Wunderlist used to do