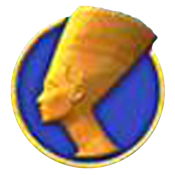 LUXOR: Quest for the Afterlife

“Quest for the Afterlife can’t help but still tower over the competition.” – 4/5 Stars from Gamezebo.com

LUXOR, the #1-selling, action-puzzle game, blasts outside Egypt’s borders and onto the Silk Road in search of riches beyond imagination.

Move your shooter with skill to create matches of three or more colored spheres and eliminate the oncoming chain of balls before they reach the pyramid. Collect falling Ankh coins to earn extra lives, gems for bonus points, and power-ups to make your matches even more effective!

When the sacred artifacts of Queen Nefertiti are robbed, her earth-bound spirit calls upon you to find them so her eternal spirit will rise. Wielding the falcon-wing shooter of Horus, you choose your own paths on an expansive journey out of Egypt.

In your quest to reveal and assemble Queen Nefertiti’s artifact pieces, you'll explore exotic Persia, Syria, India and other regions of the Near East. Track down each of the robbers before the sands of fate shift and defeat them in an all-new Battle Mode. Your great adventure awaits in, LUXOR: Quest for the Afterlife!

Choose the path of your quest as you venture from Egypt to 18 cities in 6 exotic regions along the Silk Road
Compete against enemies in an all-new Battle Mode
Track down enemy leaders to obtain the most valuable artifacts
Queen Nefertiti speaks to you, her champion, in a quest for her afterlife
100 all-new levels in Adventure Mode
Unlock upgrades in the in-game store, including new ball and shooter sets
Locate the pieces of Nefertiti’s artifacts and assemble them to upgrade you abilities in the Adventure campaign

*Note: Gamezebo.com’s review refer to PC version of LUXOR: Quest for the Afterlife. 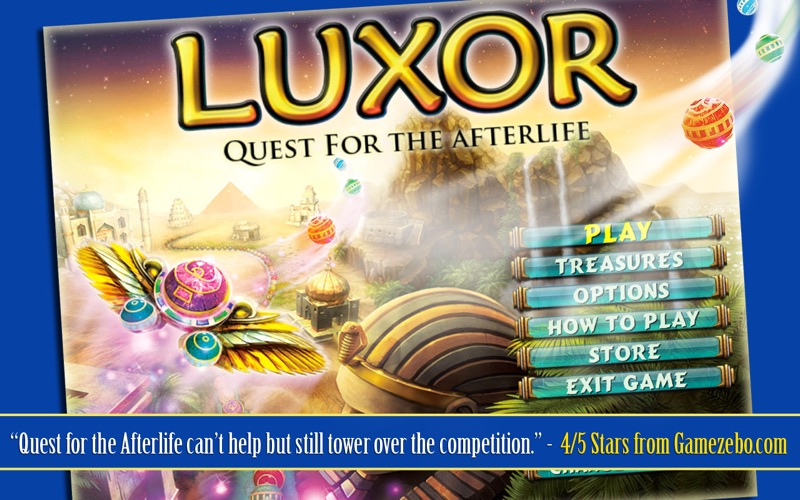 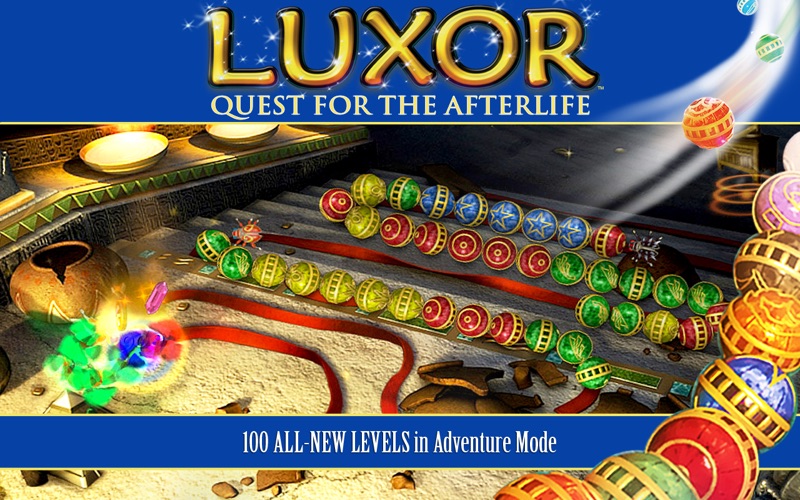 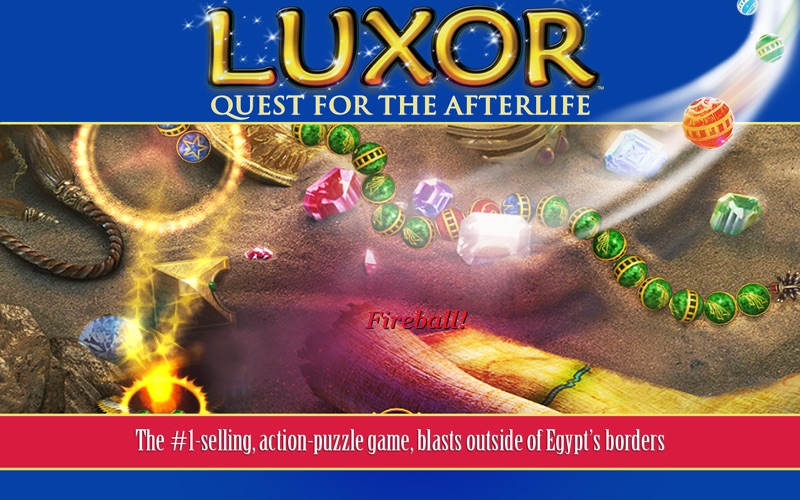 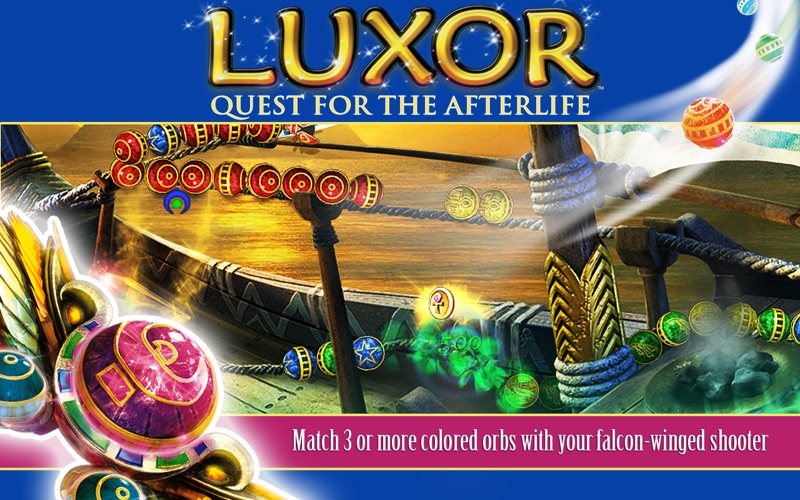 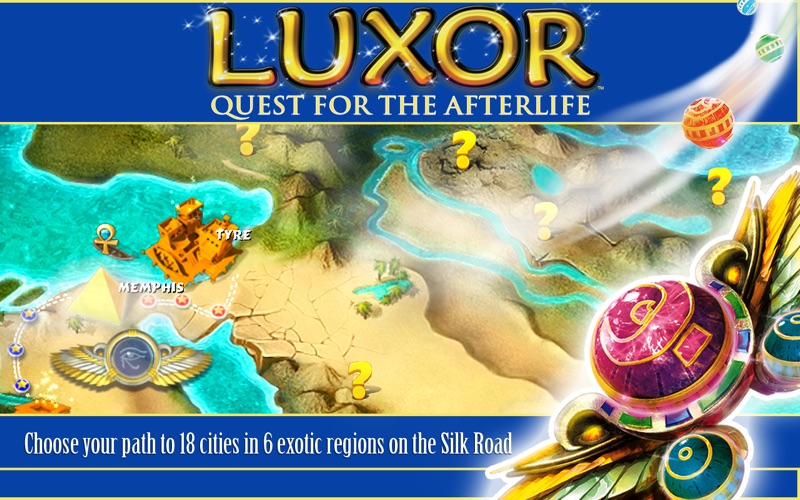 luxor - love the game I have played it on my mac for quite a while and had no problems at all in fact it the only game than can relax me after a 14 hour day of work and school. Not sure what all the fuss is about but I think its one of the bettter really dont have to think game.

Waste of money - I was sorely disappointed to see that this app was NOT the Luxor I know and love. It is more of a story/adventure than it is a game. I was very frustrated to have paid as much as I did (even at 50% off). There is no way to bypass the voices and storytelling and just play the game. I bought this game and within 5mins knew I would never play it again, it's such a letdown. On the flipside, the graphics are awesome.

Found helpful by 5 out of 8 people

luxor - love the game I have played it on my mac for quite a while and had no problems at all in fact it the only game than can relax me after a 14 hour day of work and school. Not sure what all the fuss is about but I think its one of the bettter really dont have to think game.

Dull - The price is appropriate, because this game really doesn't live up to its predecessors. I expected that the end adventure would be similar to the previous iterations of Luxor: difficult to the point of ripping my hair out as I tried to beat it. Instead, the final run is boring and simple. To put it in persepective, the so-called "insane" level of Luxor: Quest for the Afterlife (LQA) is about as stressful as the early to mid-stages of the Normal level in Luxor 2. The tracks are easy to beat, especially after upgrading the powerups in the "Store." Worse still, after all the upgrades have been purchased, the coin collection remains when the player completes a level (Easy, Normal, Hard, Insane), and so do the upgrades. So as you play, you keep collecting worthless coins with no way to spend them. In previous versions of Luxor, 50 coins translated into an extra life, which was good, because that final track could take a lot of lives before the player beat it. In this version, players don't "die" when they fail to beat a track. There's on a "Try Again" button. Sorry developers, but you really missed the ball on this one. You took out everything that made play interesting in the previous versions and left us with a boring piece of software.

Addicting - I am not much for video games, but this one is addicting. I was looking for something inexpensive that I might play more than once. I haven't been able to stop, and for $3 it was well worth the money. I feel bad for the guy who said he would not ever play it again. I think he is missing out.

Doesnt work - I have a 3 monitor setup and this app seems to be flaky as a result. It displays on my non-primary monitor, but won't accept mouse clicks there. Please fix!

Dissapointed... - I paid and downloaded this app and it doesn't run correctly... 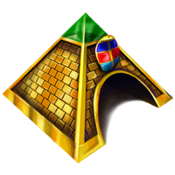 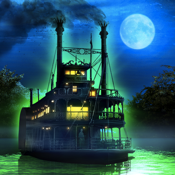 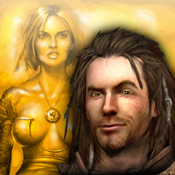 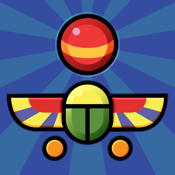 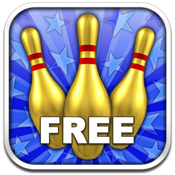 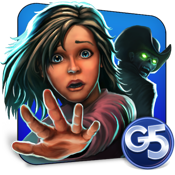 Nightmares from the Deep: The Cursed Heart, Collector’s Edition