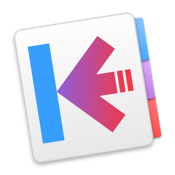 Keep It is notebook, scrapbook and organizer, ideal for writing notes, saving web links, storing documents, images or any kind of file, and finding them again. Keep It is the successor to Together.

Available on Mac, and as a separate app for iPhone and iPad, changes are automatically made available across all your devices with iCloud. Keep It is the destination for all those things you want to put somewhere, confident you will find them again later.

Create, edit, view and save:

• Notes with styles, checklists and attachments that look good and read well on all your devices
• Web links with live previews, or saved for offline viewing as PDFs or web archives
• Rich and plain text files
• Markdown documents, with preview and syntax highlighting in a choice of styles
• Add highlights and notes to PDF documents
• Add any other kind of file, and see previews for most images, documents, web pages, and more
• See summaries and thumbnails in the list for most files
• Use icon view to browse items by their thumbnails
• Use the Recents list to see things you’ve added or viewed lately
• Share folders and items with other Keep It users via iCloud
• Encrypt files with a password

• Search everything in Keep It: names, tags, file contents, dates, kinds and more
• Text recognition for scanned documents and images
• Choose suggestions as you search to create complex searches with ease
• Use keywords and natural language for dates while searching
• Save searches for later reuse
• Use the Tag Filter to see all items with a tag and any other relevant tags; choose another tag to drill down further

Use Keep It with other apps:

• Compact Mode reduces the app to a single column, ideal for using alongside other apps
• Drag pretty much anything to Keep It
• Copy clickable links to items and lists in Keep It
• Share extension can add links, text, images and other files, and append text to notes from within other apps
• Save files to Keep It’s folders to automatically add them to the library
• Use a bookmarklet to add links from web browsers that don’t use Share extensions
• Automate tasks with AppleScript

SUBSCRIPTIONS
Keep It can be used with a paid subscription that you can purchase in the app. A choice of either a monthly or yearly subscription is available.

Payment will be charged to your iTunes Account following a free trial, unless you cancel the subscription at least 24-hours before the end of the trial period.

The subscription will automatically renew unless auto-renew is turned off at least 24-hours before the end of the current period.

Your iTunes Account will be charged for renewal within 24-hours prior to the end of the current period.

Subscriptions may be managed and auto-renewal may be turned off by going to your Account Settings after purchase.

Fixed an issue extracting info from new and edited items. 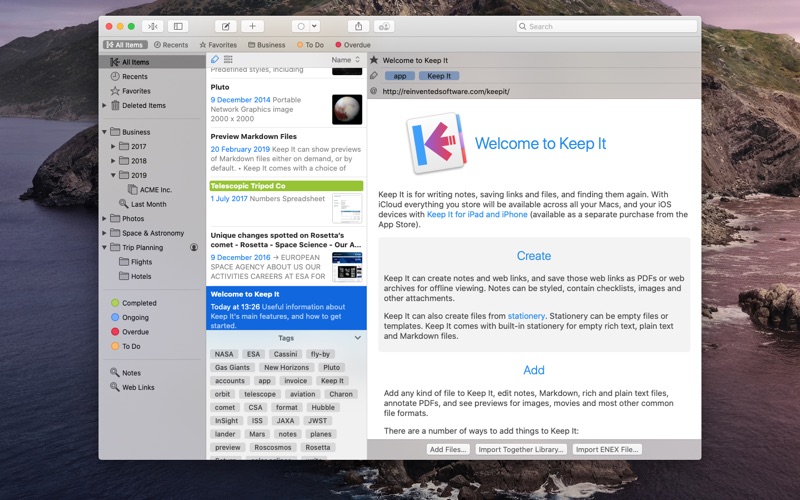 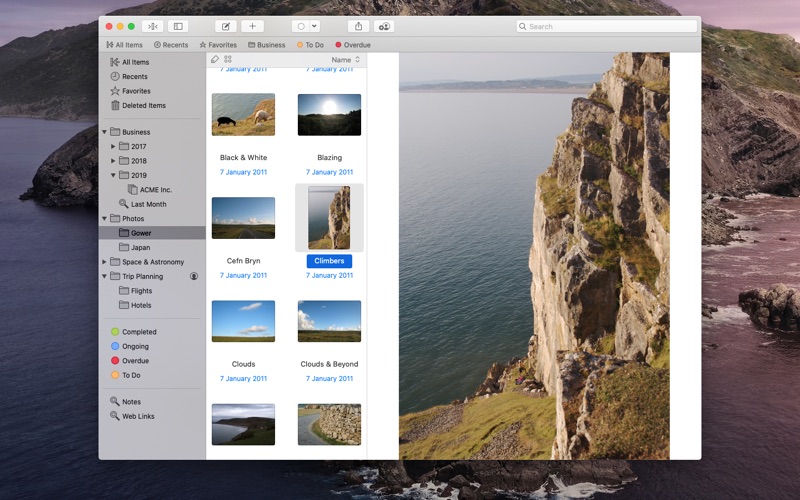 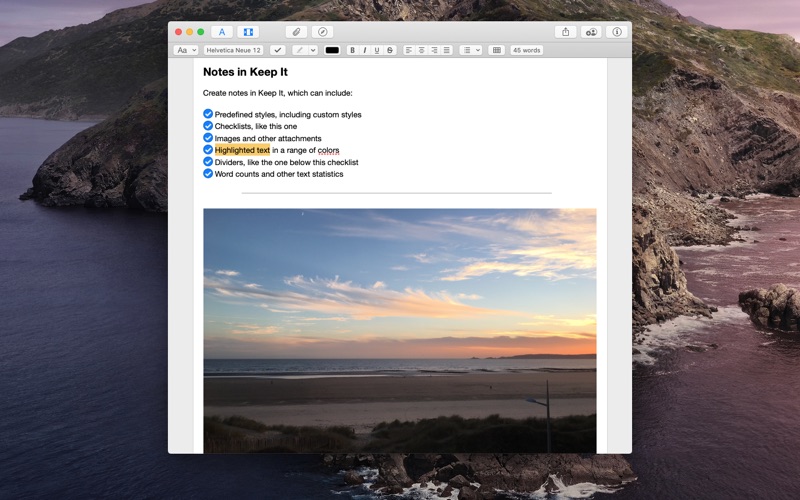 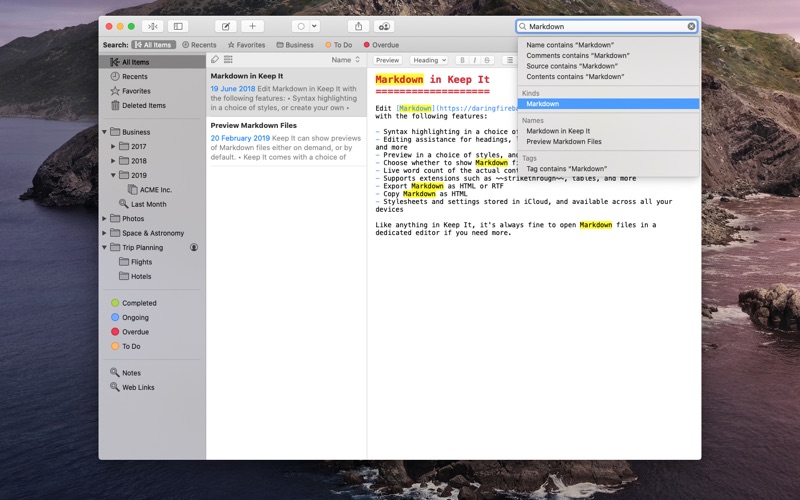 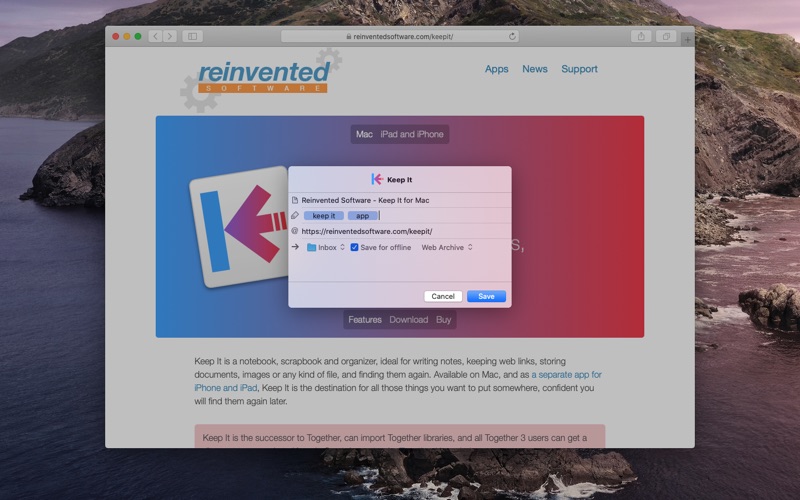 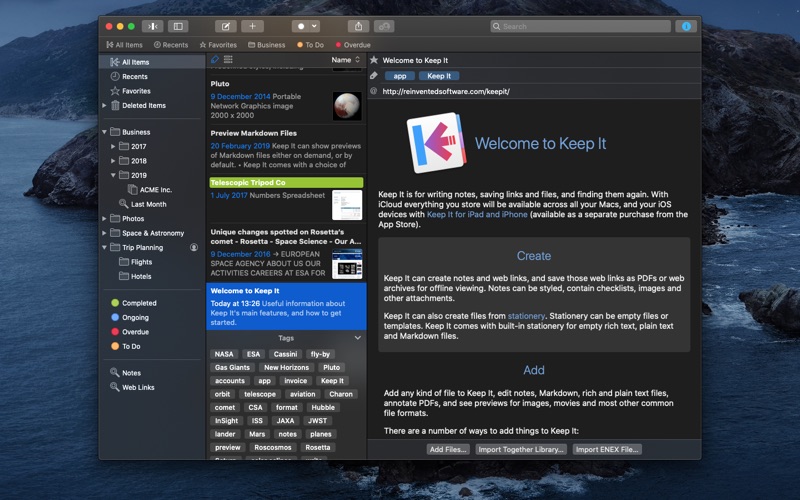 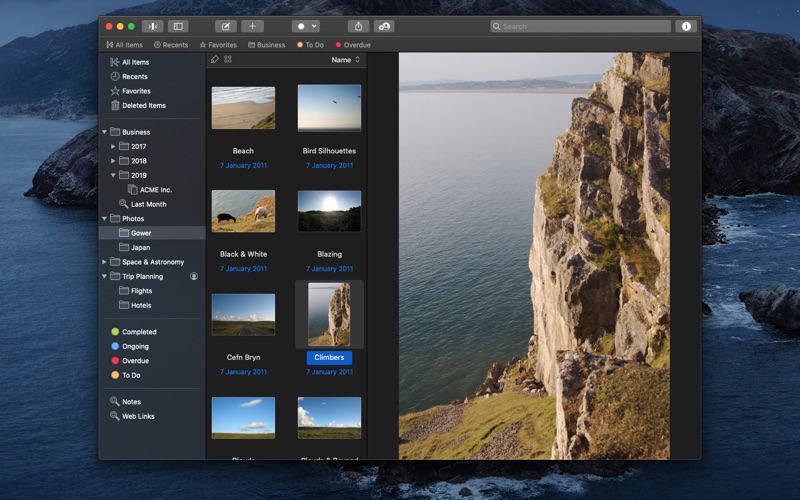 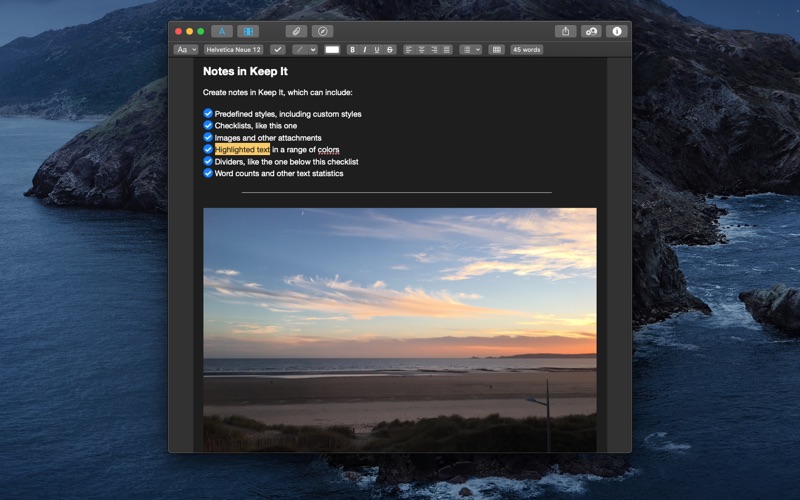 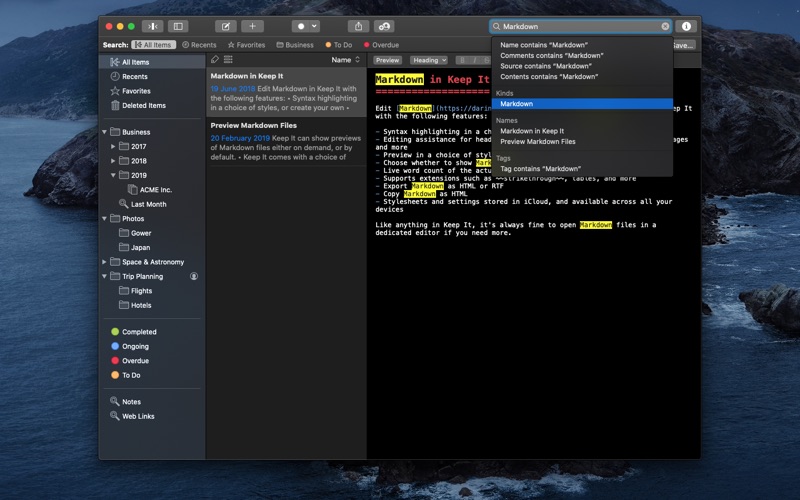 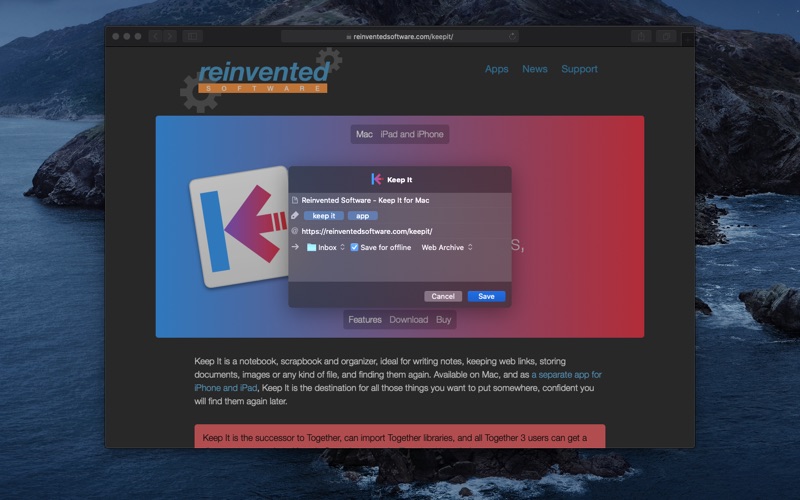 Here is WHY this is EXQUISITE - In the 80's Sharp made a PDA called the ZAURUS. It had a graphical folder file allegory and you could drag anything to MULTIPLE folders. This simple and elegant system has been missing - until KEEPIT. Assume you have a note or a video (yes you can add video or any file) and you want that in a "FOLDER" (They call them BUNDLES) called PROJECTS, but ALSO you want the SAME info in a "folder" called URGENT and ALSO in one called KEY CUSTOMERS. With this program the one entry can be dragged to each or infinate Bundles and removed from any without affecting the rest. This is HOW people manage. I have a report and I need to discuss it with 4 people. I have PEOPLE FOLDERS and drag this report to all 4. As I discuss with each, I make notes for THAT discussion, and can then delete the report from that person's "discuss" folder. This program is fast, accurate and well desigjned. 10 Thumbs up for a program that deals with complex issues very simply. No curve to up time. It's just there and you get it intuitively.

UPDATE: It Gets Worse… Can you Give Zero Stars? - UPDATE: Another Major Bug in Keep It today. After a developer update on Keep It this week, the software now wouldn’t even validate my paid licence. It tries, then gives me a “General Error” message and that’s it. I had forced me to “trial” the software to access my materials. And in two weeks, I’ll have no access to my stuff. Yarch. It’s yet another bug in the system — and the developer, Steve Harris, who politely commented below “I fix every crash that gets reported and these days they are quite rare” responded promptly with zero help, blaming the issue on Apple saying: "Sorry, I can't do anything about issues with your Apple ID”. Not sure how blaming Apple amounts to “fixing every crash” but it does feel like par for the course. Steve, I don’t have issues with my Apple ID, your software does. My Apple ID is valid, fine and was used to buy your software. Now your software won’t validate the fact that I paid good money for Keep It. And someone who says "I fix every crash that gets reported and these days they are quite rare,” should maybe back that up with customer support and not leaving me out in the cold. BUYERS BEWARE — SAVE YOUR MONEY AND AVOID THE HEADACHES Original Title: Want to Like It… But Crashes So Regularly... I really, really want to like this program. Sadly, the fact is that the software has never been stable. It has always crashed, sometimes losing information. And frankly, I just can’t trust it. I speak from the perspective of being a LONG TIME user of Keep It and the previous iteration, Together. Over the years, I’ve used it and spent so much time hoping that things would get better so i wouldn’t have to transfer my library to some other system. Today’s crash has made me want to throw in the towel and move back to DevonThink Pro Office. It’s just so much more stable. My suggestion is to spend your money elsewhere. 8-(

Found helpful by 3 out of 8 people

Missing a key feature - Keep It is really a well-written app and I use it every day, but for me it's missing one key feature: The ability to lock notes. Too many times I've accidentally deleted text in a note and didn't notice until the next time I opened the app. Would *really* love to see this feature added.

I use it All the Time. - Just what I needed. Tried finding something else to use as the interface is not my favorite, however this app does just what I want and the developer stays on top of it and updated it all the time so it stays running smoothly! Great App!