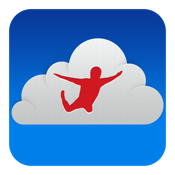 * Easy setup and reliable:
Jump Desktop is very easy to configure; anyone can do it! Just visit: https://www.jumpdesktop.com on your PC or Mac, click the ‘Automatic Setup’ link and follow step-by-step instructions. You’ll be up and running in no time.

* Supercharged Productivity:
Use Mac keyboard shortcuts in Windows. Seamlessly switch between computers without changing the way you use the keyboard. Vastly improves productivity. Fully customizable: Configure your own shortcuts or use the built-in defaults. No other app comes close.

* Powerful Collaboration Features:
Collaborative screen sharing lets many users connect to the same desktop. Each user gets their own mouse cursor and can click and point without fighting over the same cursor. Great for editing documents with coworkers, tweaking designs with remote team members, creating presentations together, and teaching Grandma how to clean out her email.

* Remote Support
Connect and help anyone by asking them to install the free Jump Desktop Connect app and share a simple URL with you. It's simple, quick and very powerful.

* Super fast and beautiful:
Our next generation high performance Fluid Remote Desktop is optimized for low latency secure screen sharing. We also have our own in-house implementations of VNC and RDP protocols. Multi-core, hardware accelerated rendering for zippy performance. Optimized for MacBook Pros and iMacs with Retina display.

Features:
* Multi-protocol: supports RDP, VNC and Fluid Remote Desktop
* Collaborative screen sharing
* Remote support
* Full international keyboard support for RDP, VNC and ARD
* Dictation support (Mountain Lion and later)
* Tabs (macOS Sierra and later)
* 3 different ways to zoom and pan the remote screen (really useful when controlling multi-monitor remote systems from laptops)
* Easy and secure setup: Automatically configure your PC or Mac for remote access without worrying about your router settings. Set up as many computers as you like and manage them all using your Google account (optional)
* Built-in SSH tunneling for RDP and VNC connections 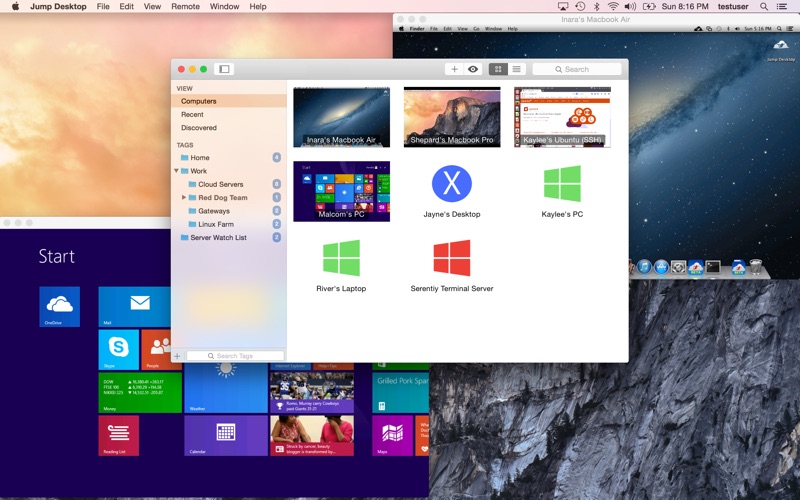 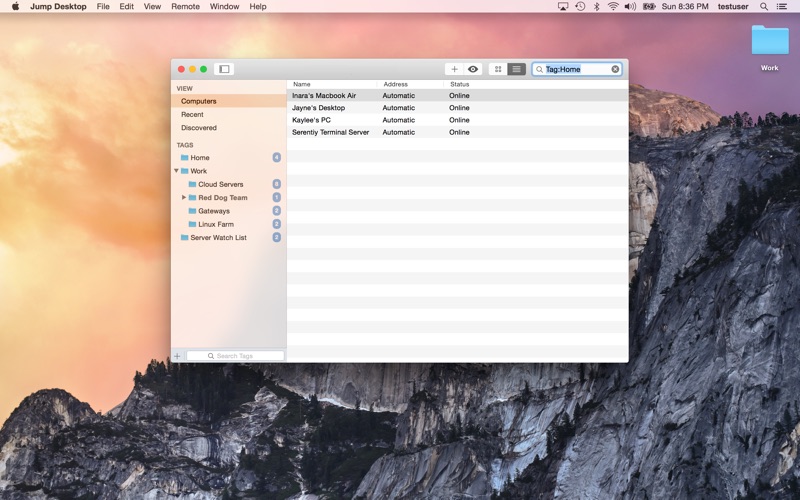 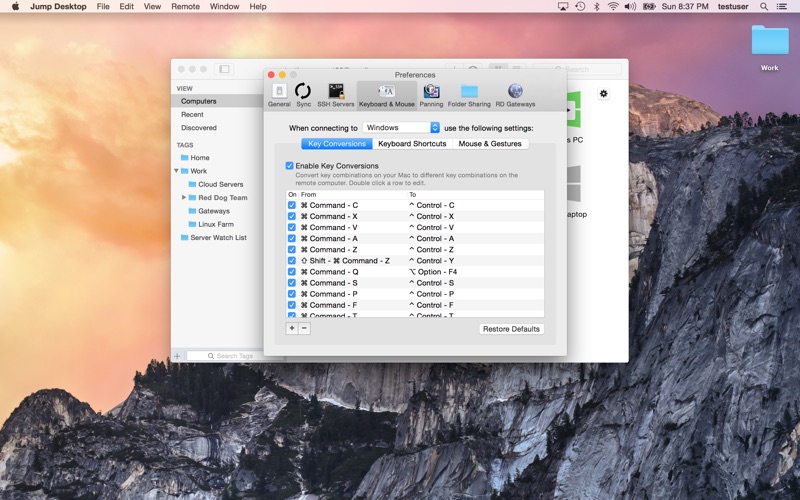 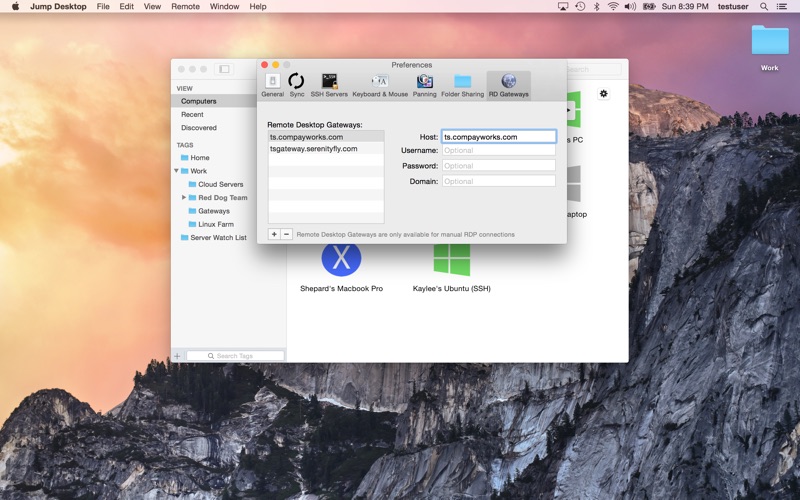 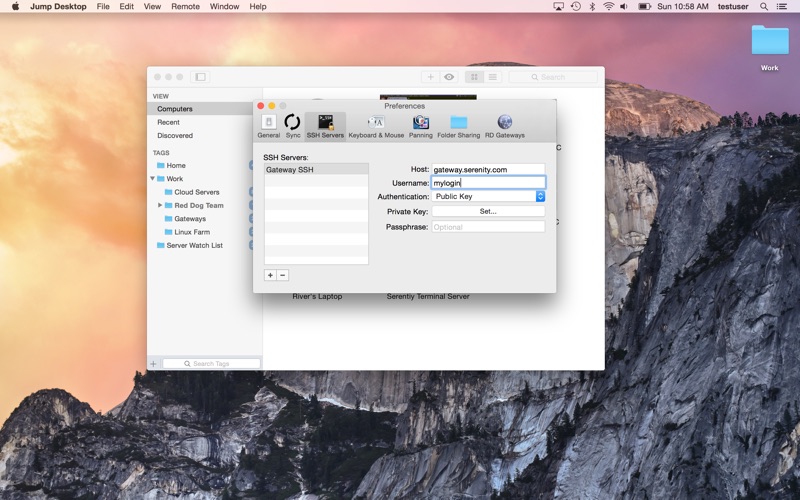 THE remote desktop app - I’ve used this app for at least five years and it has has honestly performed flawlessly. It connects to our remote server very quickly, no lag time on the keystrokes… it does exactly what you need it to do. I run it on my Mac, my ipad and my iphone. There has been many a road trip where I had to access my desktop on my phone for an emergency file and it does the trick. Oh, and here’s a protip: Your boss is on vacation. You cut out early for the day. If you respond to an email from your boss, he or she can totally tell when your email is coming from your iPhone; it is formatted differently than a regular email originated from Outlook. If you get that email from your boss, you log onto to the Jump app, go onto your Outlook and it’s as if you sent it from your very own desk. You think this would be common knowledge, but I can’t tell you how many people i’ve seen send email from their phones in the middle of the day. Rookie mistake! But, i digress… GREAT APP!!!

Simply Does Not Work - The install process made no sense, which made me wonder about this app from the beginning. After installing the app I downloaded from the App Store, I was then prompted to install a second, related app called Jump Desktop Connect, after which there were several links and instructions that bounced me to their website to sign in, then back to the desktop app, then back to the website again, etc. etc. After multiple attempts, the app finally was installed and apparently workng on my office Mac. Then I installed it the next day on my home Mac, from which I wanted to connect to the office - but the Mac at home never recognizes that I have signed in to the same Jump account, and will not display any icons for any connectted computers. I have rebooted, reinstalled this app and made sure that Screen Sharing is turned on in Settings. Still nothing - it does not work, and I have never seen such a convoluted mess of an install. Definitely not intuitive and does not work. A total waste of time and money. I have given up and will be forced to purchase another product.

Found helpful by 6 out of 13 people

Jump is the bomb - get rid of gotomypc - I have been using gotomypc for over 20 years and the recent price increases for ONE SEAT is approx $400...WHAT? That is riduclous. I always preferred GTMPC over logmein (same company now) as the GUI was superior. Jump is free and the graphics are great. The feartures missing are remote printing and file transfer. I just print on my local network printer and just email myself the few files that I need. Works fine. Jumpdesk for the Mac is vastly superior to GTMPC for Mac.....

Such great app and such great customer support - I hadn't been using my Mac for a while. Then I tried to use Jump Desktop again and had some issue. Wrote these guys and they replied almost immediately. The offered a solution in no time and I'm pluging along. Turns out the issue was on my side. Not enough good things to say about the company and software. The biggest plus though is that this programme should cost 300 dollars no the 30 misley bucks you pay for it. Thank you Phase Five Systems!!!

Terrible, terrible documentation - The only help appears to be the website. Its a disorganized mess of articles with no logical flow. I have two macs and a PC. I am able to remote into the PC from both Macs, but I cannot find any way to remote from one Mac to the other. I tried installing Jump Desktop Connect on one of the Macs - however, it doesn't seem to do anything and the statement that you can go to your account and find the link appears to be wrong. The app has numerous options and I'm sure I should be able to do what I want, so its even more frustrating that the documentation is so poor. On the plus side, when it works, its very good in terms of perforamance and stablity, so that's why I've given it two stars - otherwise it would be 1.

Great app when it works, no support when it doesn't - This app worked at first. Then not at all. It’s an issue with the app: same computers, same protocol, Microsoft Remote Desktop establishes a connection in seconds, Jump fails every single time. Support is non-existent. Developer just disappears completely, or shall we say ‘jumps' along with your $30. Makes you wonder what they’ve been doing with your connections, too.

Love it! - I don't normally write reviews, but this time I had to comment. I found this app after months of frustration with others. I've only been using it for two days, but I can already say that it is much more stable and responsive than RemotePC, GotomyPC and Microsoft Remote Desktop. I am definitely a convert! 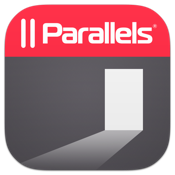 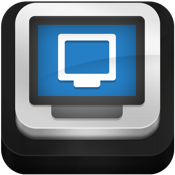 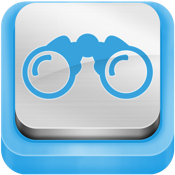 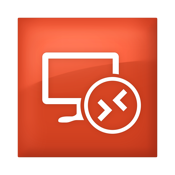 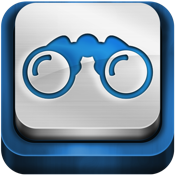 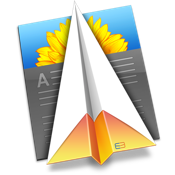