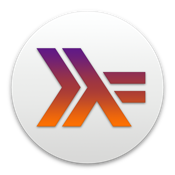 Learn functional programming with Haskell. Haskell for Mac provides everything you need in one convenient package.

You get an easy-to-use innovative programming environment optimized to help you understand and develop Haskell code quickly. Regardless of whether you are new to Haskell or whether you like to explore advanced language concepts, algorithms, or libraries, Haskell for Mac will make you more productive than conventional command line-based Haskell systems.

Our secret weapon are our unique Haskell Playgrounds. They facilitate live programming, where your code is constantly executed while you develop and change it. The results of tests and example code are continuously updated and displayed as playground results, regardless of whether they are text, graphics, web pages, or even embedded animations and games.

Haskell for Mac is made for beginners and experts alike.
• The continuous feedback of interactive Haskell playgrounds is ideal for learning functional programming.
• Everybody saves development time due to the fast turnaround as the Haskell code is continuously being type checked and tested against playground code while you edit and refactor.
• Haskell playgrounds provide the ideal environment for experts to quickly experiment with new ideas and to iterate on prototype code.

Haskell for Mac is designed for macOS Mojave and Catalina.

EASE OF USE
Haskell for Mac is an integrated graphical development environment for Haskell projects, avoiding arcane installation procedures and cryptic command line tools. It includes a project organizer, a Haskell code editor, and playgrounds for interactive code execution. The code editor provides integrated Haskell support for syntax highlighting (with customizable themes) and auto-completion of function, variable, and type names.

RAPID FEEDBACK
Modern software development is about iterating quickly. While you write, modify, and refactor your Haskell code, it is being continuously type checked and tested. This helps finding mistakes quickly and speeds up development.

WRITE GAMES IN HASKELL
Haskell for Mac integrates a purely functional interface to the macOS SpriteKit framework, including its sophisticated animation system and physics engine. Discover how to write games in a functional style. It only requires basic Haskell knowledge and is a great way to learn Haskell!

PLAYGROUNDS ARE SAFE
Whatever you do in a playground, your data is safe. Haskell for Mac uses macOS sandboxing technology to ensure that anything that happens in a playground stays in the playground. Even if you download a Haskell project from the Internet, the playground code cannot access any other data on your Mac, except with your explicit permission.

LIBRARIES AND MORE
Haskell for Mac includes a rich set of over 200 widely used Haskell libraries saving you the trouble of compiling and installing them yourself. However, if you like, it still gives you the flexibility of installing your own libraries. For further technical details, please refer to our product website at http://haskellformac.com

We are always looking for ways to improve Haskell. Please send us your suggestions by contacting [email protected] or use the handy feedback form in the Help menu of the app. 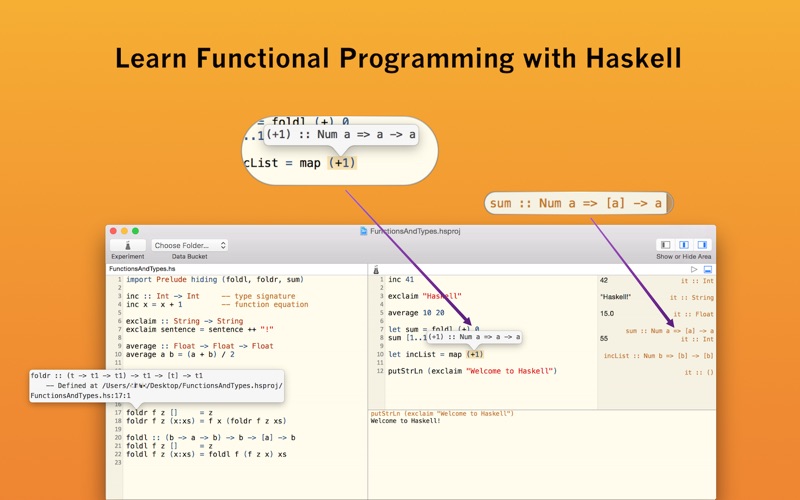 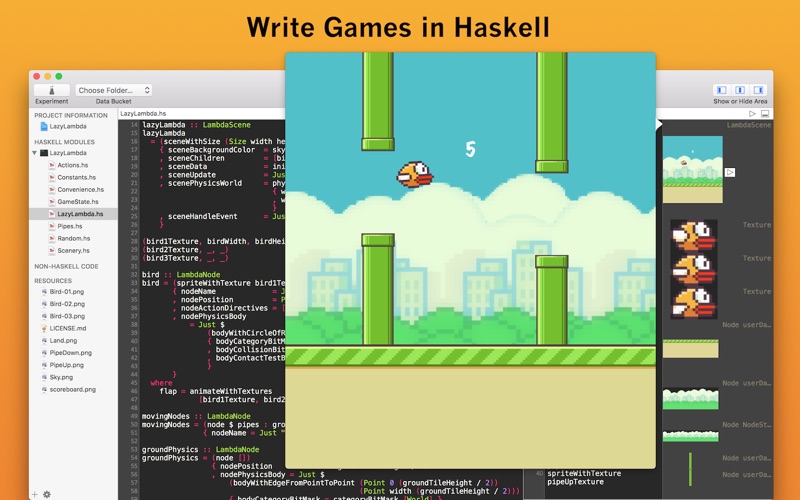 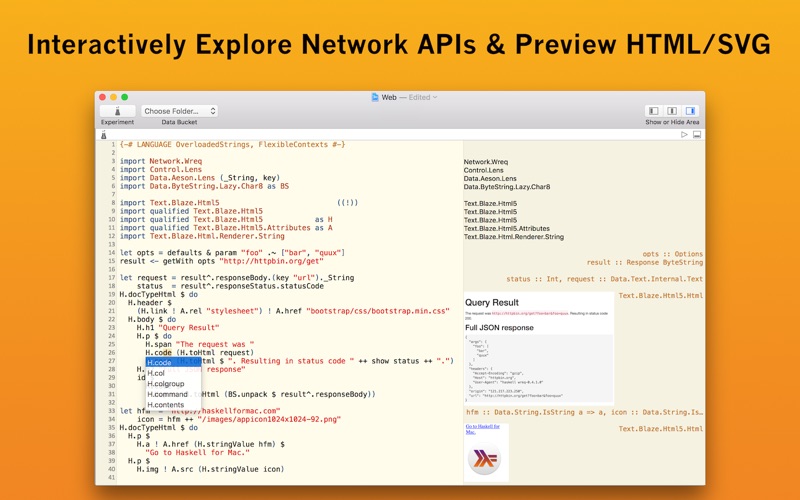 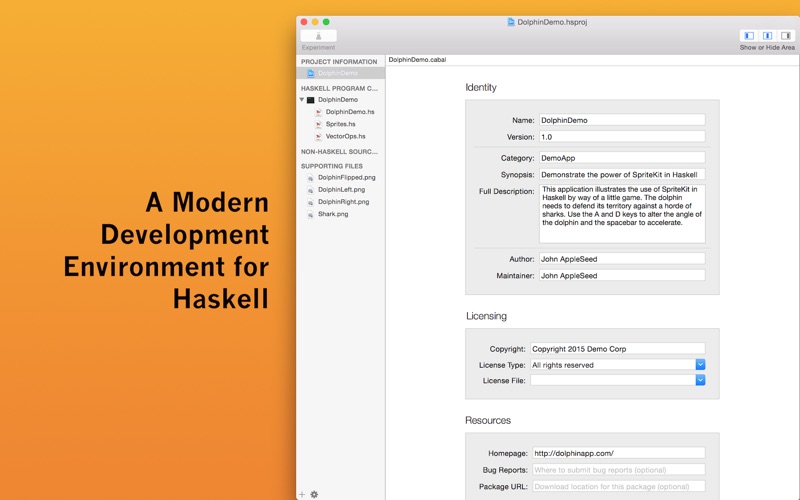 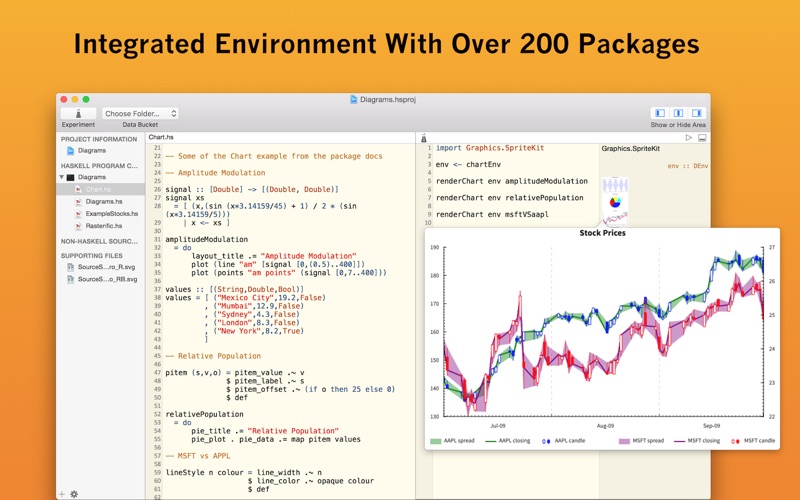 An easy-to-use Haskell learning and development environment - If you’ve ever been curious about functional programming, or have been meaning to tinker with the Haskell programming language, this is the place to start. After working with Swift playgrounds and IPython notebooks, I’m convinced that interactive, compute-as-you-type environments are the best way to learn a new language. I wanted to learn Haskell last year, so I spent days setting up an IHaskell environment to tinker with it. I learned an incredible amount about that language in a short period of time by experimenting with it in an interactive IHaskell notebook. Haskell for Mac takes all the hassle out of setting up a system like that, and makes it a one-click install. Not only that, but it provides a truly as-you-type evaluation of everything you’re entering. It even contains all the packages you’d need to perform advanced graphing, something that took me over a week and a huge amount of frustration to get right in IHaskell. The interface is simple yet polished, and makes it easy to organize even multiple-file projects with resources within the playground environment. I’m really excited about the potential for this application to speed up my Haskell learning and development process. If you have any interest in Haskell or functional programming, you owe it to yourself to get this.

Crashes on El Capitan - When I run the examples provided to draw the graphics, the application crashes immediately on El Capitan.

Found helpful by 6 out of 7 people

Take my $$$ - I never used Haskell before getting this app. I do ObjC and Swift and wanted to learn about functional programming. This app is not a tutorial, but when combined with the web's "Learn You Haskell For Greater Good" (google it) i have slowly but surely improved. Had this app for years (since it first hit the app store). Greate support, updates, and works with all the haskell tutorials found online. This is not some Mac -version or light weight thing. This is Haskell. I really appreciate your company doing this. KNowing what I know now, i would pay 2x the price.

Easiest path for non-power users - I would prefer to work in VS Code, but setting up Haskell there is a PITA at best and broken at worst. I use Haskell for prototyping and this is a simple way to get working with the code.

This isn't an IDE, it's garbage - You can't do anything as simple as compile and run from the IDE. This is absolute crap, these reviews were written by friends of the developer. I was fooled, do not waste your money on this garbage.

this is not an IDE - I don't think this is an IDE. it's missed almost all the important features one IDE should has.