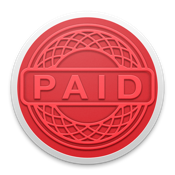 Chronicle Pro is all about eliminating financial surprises and helping you understand your spending. Here are some of the ways Chronicle saves you time and money (and reduces stress, too):

- Never Forget A Bill
With notifications, and upcoming bills in your menu bar and notification center, Chronicle will always keep you up-to-date.

- See How Much Is OK To Spend
Chronicle takes into account your monthly income, your bills, and even bills you have to set aside a little for each month (such as insurance payments, annual memberships, etc), and tells you how much money you can safely spend each month.

- Know How Much To Save
Amount-To-Save feature calculates how much you need to save each month for bills that repeat less often, like an annual insurance bill or car registration.

- Eliminate Surprises
Intelligent Estimated Amount Due feature estimates how much is due for bills that vary, like credit cards or utilities, using your payment history and the time of year.

- Remove the Hassle From Paying & Keeping Track of Bills
Pay bills online and log them in seconds using Chronicle's integrated browser, and keep proof of all your payments, including storing receipts.

- Understand Your Spending
With month-by-month payment history, and annual reports, you can break down your spending by bill or by specific tags, so you can understand where your money is going.

If you pay bills, you need Chronicle. It gives you peace of mind and control of your financial future. One late payment can wreak havoc on your credit score, leading to higher interest rates and denied loans—in short, completely affecting your financial life. With Chronicle, you can make sure that never happens.

Plus, Chronicle can sync with the available iOS version, so you always have your bills available wherever you go.

MACWORLD gives Chronicle 4.5 out of 5 mice: "Chronicle is one of the slickest finance apps available for the Mac. It’s easy to use and easy on the eyes, and it’s worthy of a spot on anyone’s dock."

You can sync Chronicle data with multiple Macs, iPhone and iPad using iCloud. More details are below: http://chronicleapp.com/support/sync

NEW in 9.7: Significant improvements to the "More Actions" button on the Overview and Bill Detail screens. The button will now remember your last action for each bill, and you can click the button to perform that action. You can still click the dropdown arrow beside the button to perform additional actions. You can also configure Chronicle to always display a specific action on the button for quick access (such as "Pay Online" or "Log Partial"). 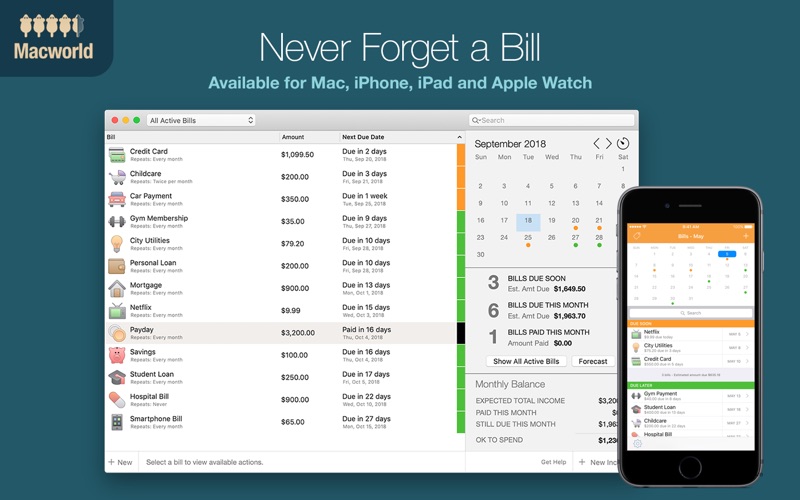 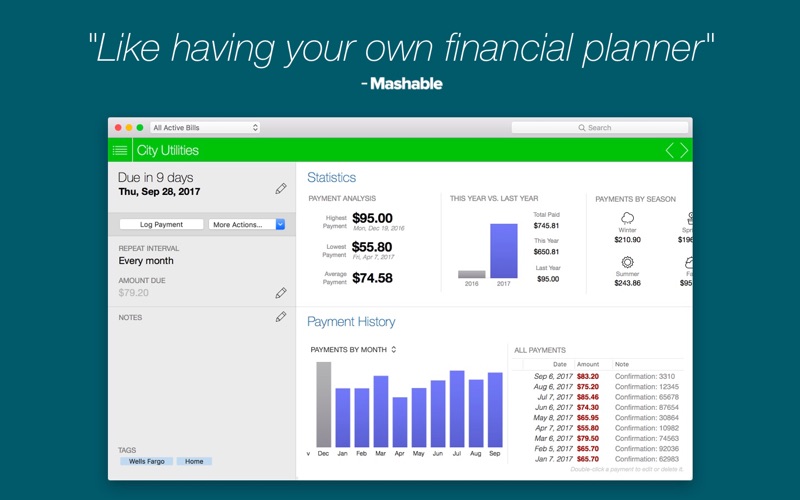 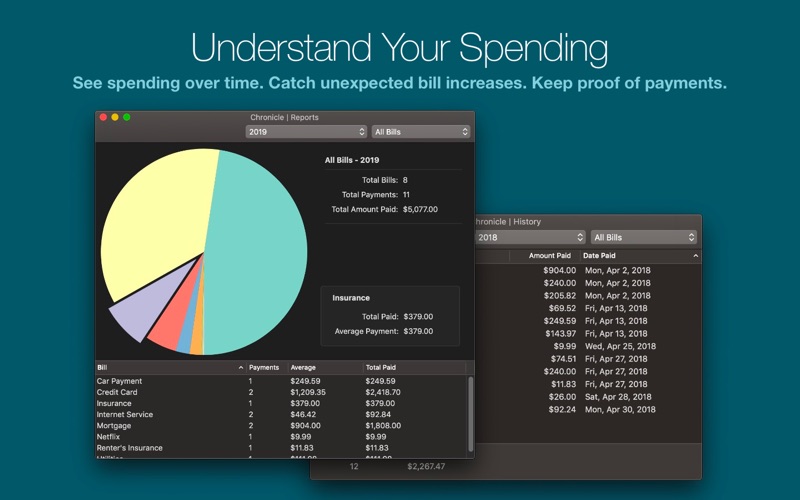 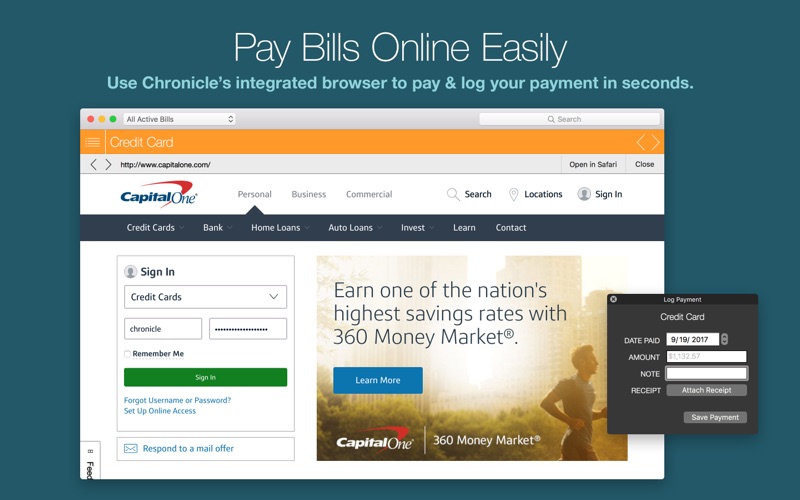 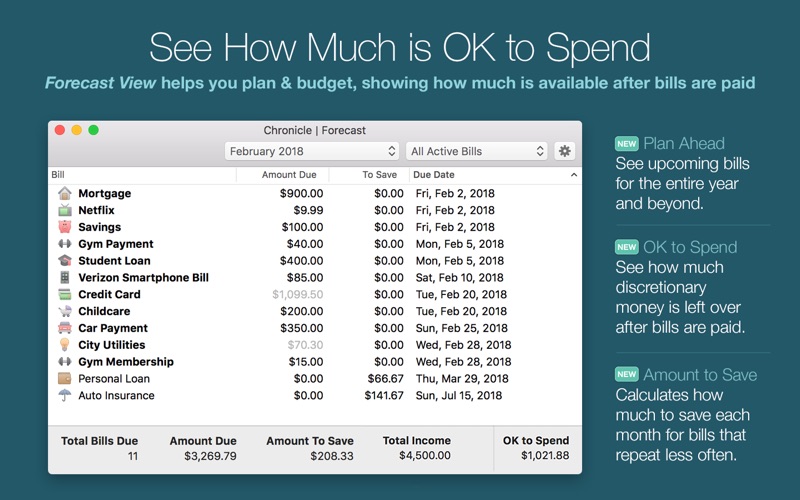 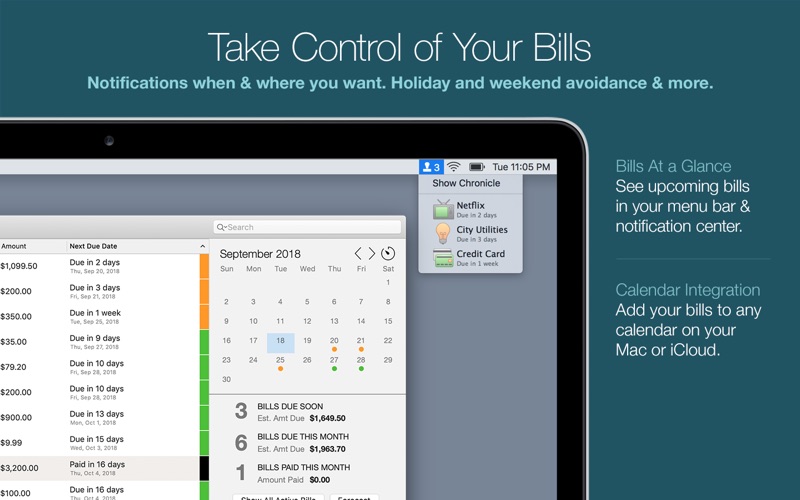 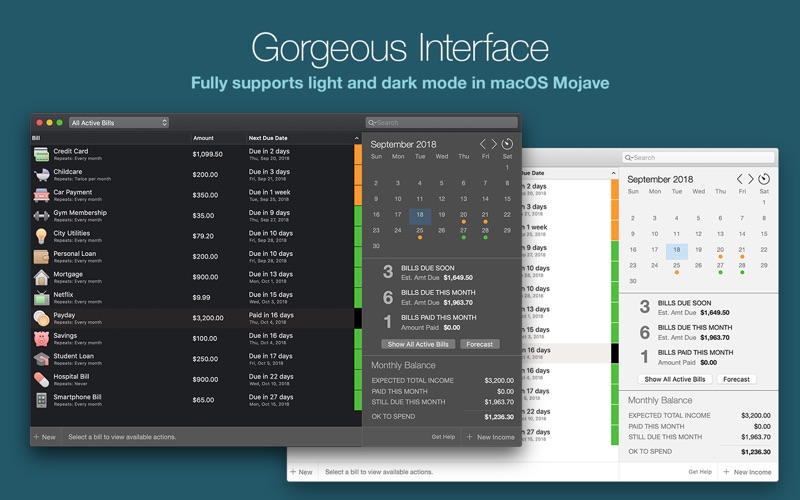 Great app - I wanted a program that focuses on my bills and nothing else. How much do I need to pay this month, and when do I need to pay them? Something that just gives me a clear reminder and tracks when and how much I have paid in the past. Chronicle has been perfect for that. It’s really easy to use, has a lot of customization options and is pretty to look at. It also does little things that I love, like breaking down bill history by seasons, months, and year. My only complaints are that settings don’t seem to sync with the iOS version, and the default options aren’t quite the same. The iOS version defaults to pay automatic bills automatically, which is not how I have the macOS version set up. So when I first opened it the iOS version it marked bills as paid that I didn’t want marked yet. Other options I have since changed I had to change manually in the iOS version. Not a big deal, but annoying. Also the interface can get a bit wonky. The bill detail window has lots of charts and displays, so I make the window bigger to see them all at once. But then your overview screen gets all these uncessary spaces as it tries to spread everything out to make use of the window size. Again, not a big deal, but annoying. I highly recommed this program. it focuses on one thing, and does it very well.

Support is MIA! - The app seems to do what it is supposed to do, help you track your bills. And once configured, it's seems to run pretty smoothly. However, heaven forbid you make a mistake, and need to go back and correct something in your history. I made an error when setting up my income, and tried to find a way to correct previous paychecks to no avail. Also, why is there no way to wipe the database clean and start over?, Or delete the database and start a new one? I tried manually deleting the database, thinking it would create a new datbase on launch...nope. I tried removing the app and preferences, then reinstalled thinking it would create a new database...nope. Utterly useless at this point, and support is apparently missing in action. Submitted a support request a couple of days ago, and have not heard a peep from them. I'll be writing to Apple and/or my bank to get the charges reversed. I think the missing features I mentioned should be address, but would be overcomeable if there were real support for the app. This would possibly been a 4 star review if not for the missing features and lack of support.

Essential Finance Application - I've been using Chronicle (MacOS and iOS) for years now and rely on it completely to make sure bills get paid and in helping me budget my finances. The developer is very responsive and helpful and the cloud subscription costs are reasonable (if you decide to extend the functionality). All of that makes Chronicle Pro easy to recommend for anyone who wants to take the stress out of payng bills on time.

Great App! - This app does exactly what it is supposed to do, works well. A version update introduced a problem. I contacted the developer, he fixed the problem quickly and released a new version with the fix. Developer is very responsive. HIGHLY RECOMMENDED!

Has a couple of querks, but otherwise it's pretty goo - I like how the app lets you save receipts for your bill payments. That was a big reason I bought the app. So, I went back and added all the receipts I've kept from paying my bills in the past. This is when I ran into some things I think could be improved. Everytime I went to add a payment, the due date would change a month. There was no way not to have this happen. If you're adding a batch of old payments like me, you don't want this to happen. Also, if I set a bill to never due, the app would set the due date as today. Logging a new payment, then deleting it, resolves the issue. However, that doesn't seem right. Otherwise, I have had a pretty good experience with the app.

Indispensable - I consider Chronicle Pro to be one of my indispensable apps. At present, I have a perfect credit rating, and that's in large part because I pay my bills on time, and Chronicle Pro is what enables me to pay when I need to. There are a few minor UI quirks, which is why I gave it only four stars, but As long as Chronicle Pro is available it will have a place on my Mac (and iOS devices, as the sync is also a terrific feature)!